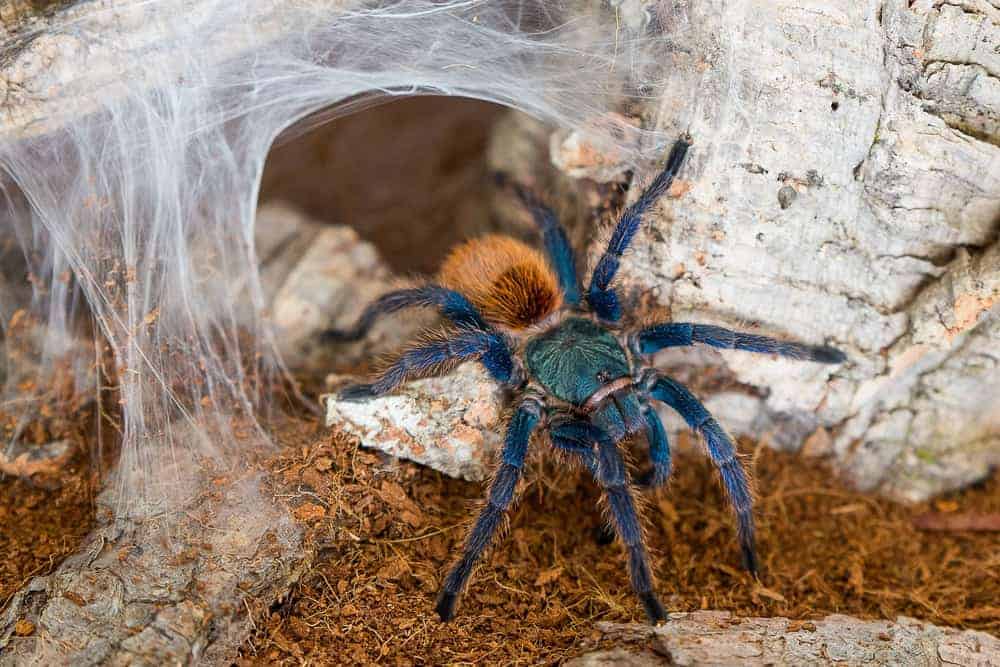 Colorful, active, and friendly are some of the distinct qualities that make the Green Bottle Blue tarantula such an attractive and interesting species.

This tarantula is excellent for beginners. But, before you adopt it, it helps to learn more about its characteristics.

Factors such as mating and feeding habits, temperament, and life expectancy can help you decide whether this is the right tarantula for you.

This article will cover all the facts about Green Bottle Blue tarantula you need to know. Read on to educate yourself further on this species

The Green Bottle Blue tarantula is the only species belonging to the genus Chromatopelma. This giant spider belongs to the Theraphosidae family, which typically consists of large and hairy spiders.

Embrik Strand was the first to describe and classify this giant tarantula back in 1907. Strand first named it Eurypelma cyaneopubescen.

In 1939, Alexander Petrunkevitch created a new genus Delopelma to where the Green Bottle Blue tarantula was moved.

Today, the genus Delopelma and Eurypelma are synonymous with Aphonopelma and Avicularia in that order.

Schmidt noted that the difference between Chromatopelma and Aphonopelma was the spermatheca, which in females appears fused.

The median posterior eyes are extremely large; some bristles divide the tarsus and metatarsus on the spider’s fourth leg. Lastly, the tarsus on the third leg features scopulae. 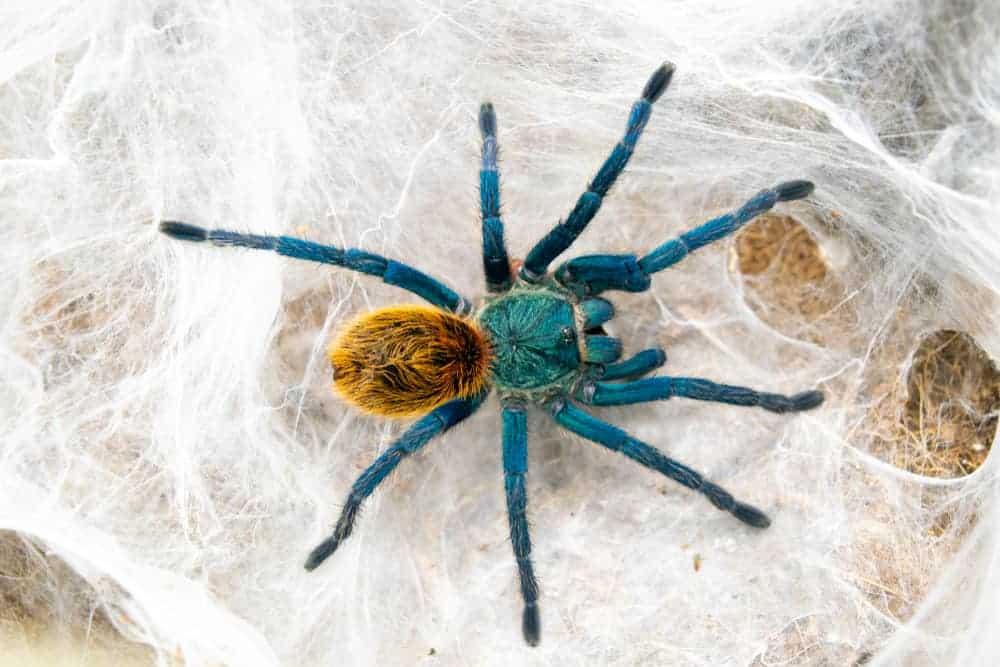 The Green Bottle Blue tarantula is native to the Paraguana Peninsula in Venezuela. It can also be found in small populations in much of the South American region.

It is a semi-arboreal species and lives on trees and the forest floor. This giant tarantula spins large webs both in the wild and in captivity.

The large funnel-shaped webs are an adaptation that protects them from the desert’s extreme climatic and environmental conditions.

The extensive webs also come in handy for trapping prey. In captivity, it can sometimes be difficult to see the Green Bottle Blue tarantula as it hides deep under the layers of its extensive web.

The Chromatopelma cyaneopubescens is an attractive organism. Its carapace is colored in striking blue-green hues, while its abdomen is a brilliant orange.

The legs are particularly eye-catching with their metallic green, blue, grey, purple, and hints of brown hues.

This is a relatively large tarantula with a body length measuring 2.75 inches long and a leg span extending out to 6.25 inches diagonally.

It can be a voracious eater and will have a moderate growth rate. They have urticating hairs, which they may flick when feeling threatened.

Before molting, both the male and female Green Bottle Blue tarantula look similar.

After the initial molting process, the sexual organs are identifiable so you can distinguish between the male and female tarantula.

The mature male has a distinctive slit. On the other hand, the female has a protruding area around its reproductive organs or spermatheca.

Spiderlings are born with bright and attractive colors. Their legs tend to be a striking pink while their carapace is dark and their belly stripped in red and black hues.

Like most tarantulas, the female Green Bottle Blue outlives the male by many years. While a male can live for 3-4 years, female Chromatopelma cyaneopubescens can live for 14 years. 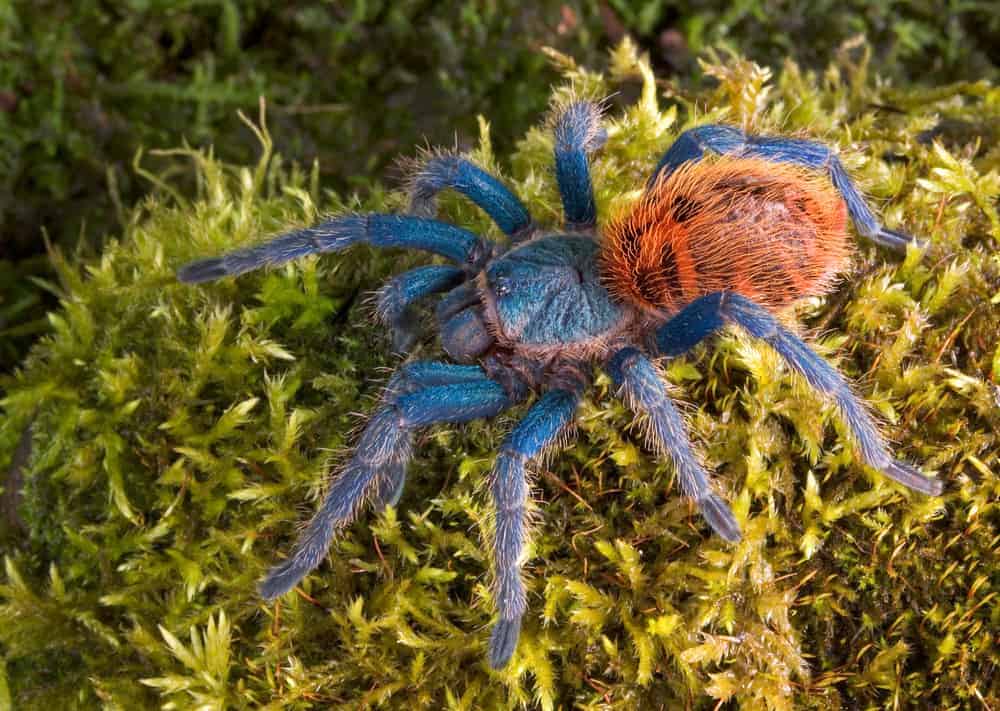 The Venezuela Green Bottle Blue is a New World tarantula. Its origins in South America and some parts of North America give it its New World status.

Unlike Old World tarantulas known to be high-strung, nervous, skittish, defensive, and aggressive, New World species such as the Chromatopelma cyaneopubescens are calmer and more forgiving.

The tarantula can still become defensive. When this happens, it can unleash its urticating hairs onto a predator or perceived threat.

The Orange bottlebrush blue tarantula is also semi-arboreal. They can be found on trees, but it is also common for them to build extensive web channels on the floor.

Being an arboreal species, this spider is capable of sudden, jerky movements that can startle the owner. The tarantula can jump 25 cm high as a response to being startled or annoyed.

The arboreal nature of these tarantulas gives them certain adaptive features that are absent from terrestrial species.

The arboreal Chromatopelma cyaneopubescens has a longer abdomen with thicker scapulate pads around the tarsi and metatarsi regions.

The pads are made using numerous minute hairs. The big scopulate pads are an adaptive feature, allowing the tarantula to survive on tree barks and move over the smooth surfaces on tree branches.

Sometimes, the Green Bottle Blue can jump from a vertical tree straight into a source of water nearby. This commonly happens when the species wants to cool its body temperatures or wants to escape a predator.

Green Bottle Blue tarantulas are more friendly than they are aggressive. Like many other New World tarantulas, it would rather retreat to its webbing when faced with a threat than immediately attack.

Still, these tarantulas will attack if they feel highly provoked or when caught off-guard. They move at a fast pace, which is a natural adaptation resulting from their tree-dwelling nature.

Their bodies are covered with urticating hairs. They rarely use these hairs, but when they feel extremely under threat, the tarantula will not hesitate to flick its hairs to deter a threat.

The urticating hairs of a Green Bottle Blue tarantula can cause skin irritation. It is best not to handle this spider as it can be sensitive and agile, and ready to put up a fight.

This tarantula species is generally inactive during daylight hours. In captivity, the spider comes out from its web at dawn or dusk to forage for food.

In the wild, Green Bottle Blue tarantulas are more active at night; a behavior clearly replicated in captivity.

The late evening hours are the ideal time to spot the Chromatopelma cyaneopubescens in its enclosure.

But, it is not uncommon for the species to be active during the day when kept in a dark room or during a cloudy day when the sunlight is dimmer. They tend to confuse these conditions with the nighttime.

The tarantula can be more aggressive when molting. Shedding its exoskeleton can be energy-intensive. At this time, the tarantula is vulnerable and must stay alert to keep away perceived threats.

Like other tarantulas, the Chromatopelma cyaneopubescens will be less active and refuse to eat when it is molting. Leave it alone undisturbed until it molts and is ready to come up to the surface for food. 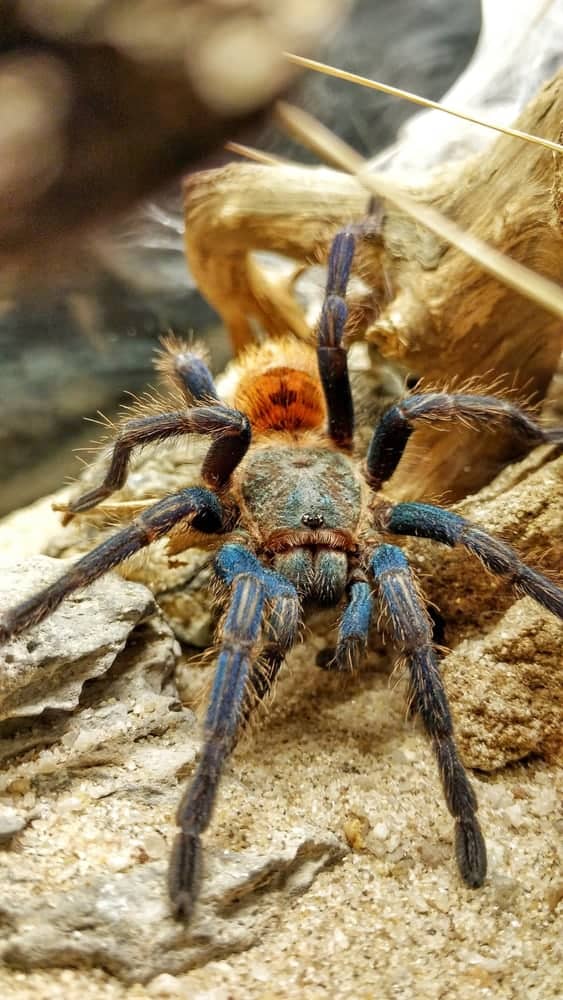 The Venezuelan Green Bottle Blue is carnivorous. In the wild, its diet consists of insects, worms, birds, and mice. In captivity, the tarantula can be offered mealworms, small mice, crickets, and any other food that amphibians and reptiles can eat.

Young Chromatopelma cyaneopubescens are voracious eaters. Frequent feeding served in appropriate portions is necessary for optimal growth. The young ones should be fed every day.

Adult Green Bottle Blue tarantulas can go for long periods without food. Typically, one large meal served once a week is enough.

During molting, the tarantula’s feeding pattern and pace will change. It is recommended not to feed it live food until its outer shell is hard enough to protect it against predators.

Green Bottle Blue female tarantulas are extremely picky with whom they can mate. Introducing just any male will not do the trick.

It is common for the female species to attack the male when put in the same enclosure for mating.

In captivity, the breeder must immediately remove the male tarantula as soon as mating has occurred.

Keeping an eye on the two can help you determine whether mating will take place so you can remove the male as soon as possible.

Mating typically occurs within a few minutes of the female encountering the male. The male will then retreat, a clear sign that you should remove it from the enclosure.

In the wild, a male Green Bottle Blue tarantula depends on its own pace and defenses to get away from the female as soon as mating occurs. Failure to back off will likely lead to the death of the male at the hands of the female.

Ensure the terrarium is roomy enough for the male to run away from the female after they complete mating.

Female Chromatopelma cyaneopubescens can lay as many as 100 eggs. This is a small number of eggs compared to other tarantulas such as the Brazilian Jewel and Cobalt Blue, which can lay up to 2,000 eggs.

The female tarantula will require adequate food high in proteins during the mating and hatching period. Giving her plenty of food ensures she is too full to eat or harm the male.

The Green Bottle Blue tarantula’s eggs can take up to 10 weeks to hatch into spiderlings. Molting will take place shortly afterward.

Unless the spiderlings are removed from the enclosure, the mother tarantula will feed on them. In the wild, spiderlings move away from their mother 2-3 days after hatching.

It is best to start breeding when the female is about 2-3 years old. The Green Bottle Blue tarantula responds well to mating when the moisture levels are slightly high during the spring.

Combine the right temperature and humidity with adequate female feeding, and you increase the mating success and outcomes. 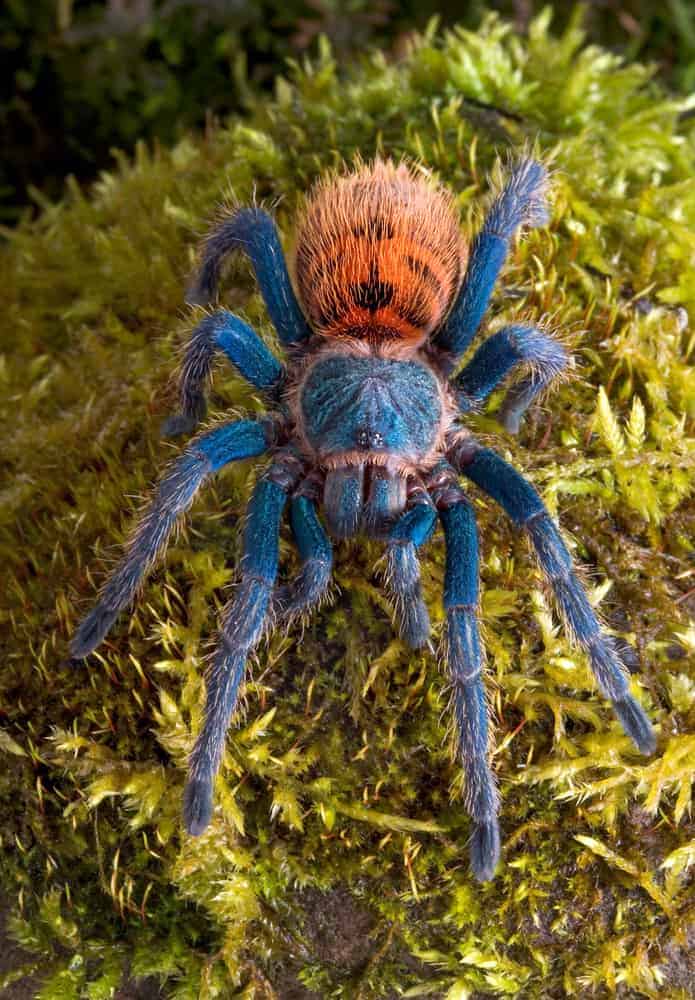 If you want to keep a Green Bottle Blue tarantula, you must have the necessary tools and equipment to house this species.

The Chromatopelma cyaneopubescens requires a roomy terrarium. Due to its docile predisposition, it will need plenty of hiding spots, as is the case in the wild.

This species requires plenty of water to prevent dehydration. Place a small water dish in the terrarium and ensure to fill it all the time.

For enclosures with spiderlings, keep the water level shallow to prevent these young ones from drowning.

Green Bottle Blue tarantulas do well in environments with an ambient temperature range between 75 and 85 F.

The ideal humidity for this tarantula is between 60 and 70 percent, measured using a hygrometer.

Special LED lighting in the terrarium can give the growing spider enough light to navigate the enclosure without feeling too exposed.

Avoid housing the Venezuelan Green Bottle Blue tarantula in a windy area or an area exposed to direct light. Your pet might die a quick death if exposed to drafts, excessive moisture, and direct sunlight.

With its calm and docile temperament, this tarantula will appreciate the introduction of small tree branches and hidden spots in the terrarium.

This species will quickly attack its own; females are more prone to attacking their male counterparts.

Avoid putting more than one tarantula in the same enclosure; even same-sex Chromatopelma cyaneopubescens will attack each other, leading to the death of one or both.

Green Bottle Blue are generally healthy tarantulas with few if any health problems. In captivity, though, these giant spiders can succumb to lethargy, bleeding, loss of appetite, and body-color dullness.

A healthy high-protein diet and the ideal temperature and humidity conditions can prevent illness, leaving your tarantula healthy all around.

You are, however, advised against handling this spider as it can flick its urticating hair and sting you if it feels threatened.

Mating this tarantula species can be particularly difficult, and it is best to work with an experienced breeder.

All in all, the Chromatopelma cyaneopubescens presents few health and behavioral problems, has a soft temperament, and is easy to care for.

I hope this round-up of the facts about Green Bottle Blue tarantula will help you if you are considering acquiring a tarantula pet.