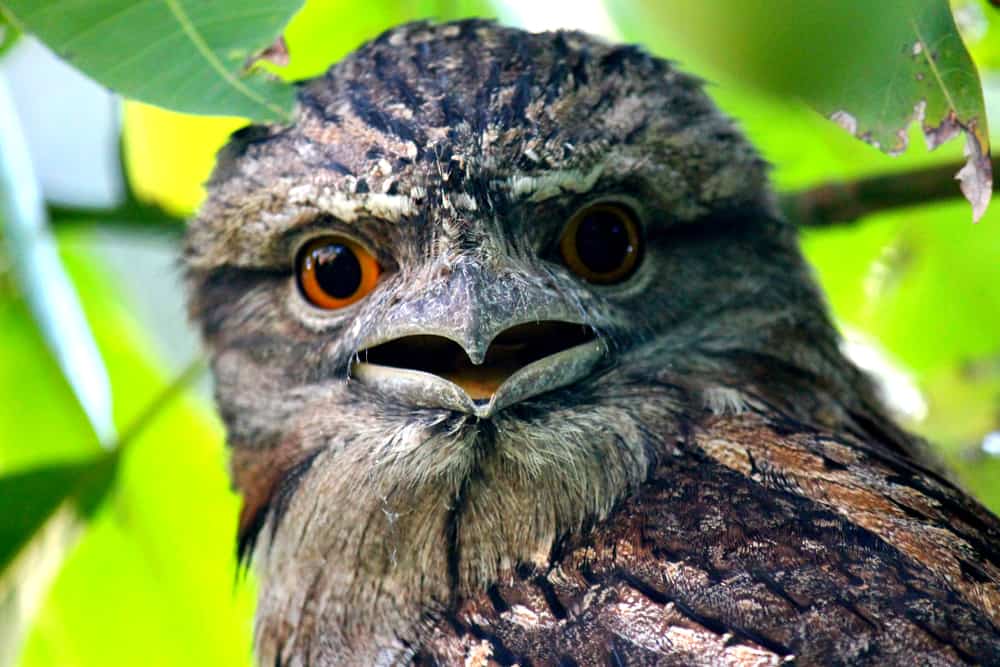 Australia is jam-packed with some of the most exotic and wondrous wildlife on the planet, from Tasmanian Devils to Laughing Kookaburras. One other fascinating animal native to the land down under is the Frogmouth.

On the face of it, Frogmouths look very similar to owls and they share similar characteristics, including the fact they are nocturnal. However, frogmouths are a species of their own and are related to nightjars and hummingbirds more closely than they are to owls.

In this article, we will take a deeper look into the lives of these creatures, and look at some of the history and symbolism surrounding them. 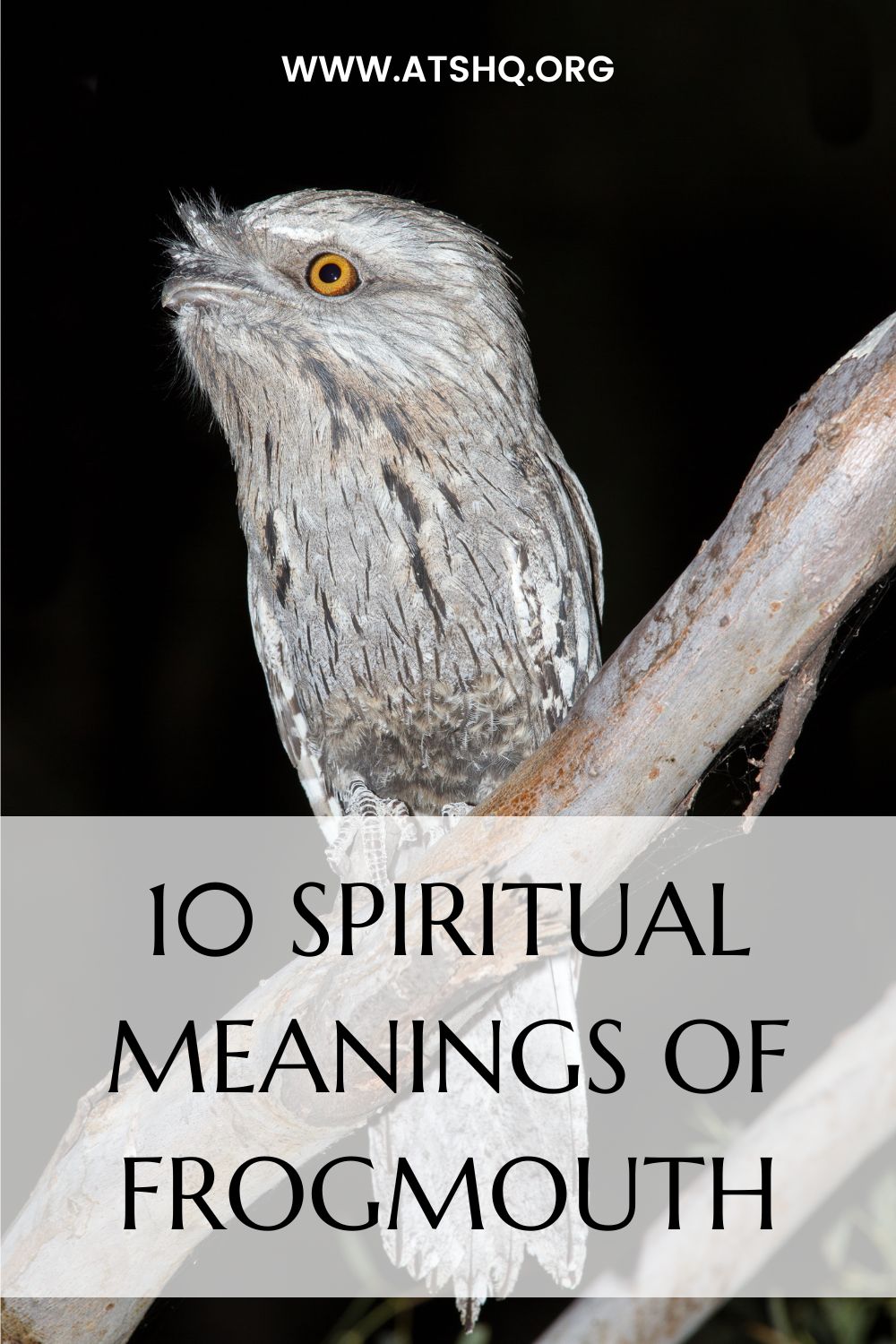 There are multiple different species of frogmouths, with some native in other parts of the world including Asia. However, the most common type – and the one most populated in Australia – is the Tawny Frogmouth.

As we’ve already said, frogmouths are nocturnal meaning they are only active during the nighttime. As a result, human interaction and engagement with frogmouths are considered to be rare. In addition to their nocturnal nature, the fact they blend in extremely well with tree trunks only adds to the difficulty of spotting one in the wild.

The best way to differentiate between a frogmouth and an owl is to examine their feet and beaks. Frogmouth’s feet are very small and weak and their beaks are wide and forward facing. Owls have larger feet and have a beak that points downwards.

Another animal they are commonly mistaken for is the southern boobook owl. This is to do with the similarities between their calls, resulting in frogmouths sometimes being called ‘mopoke’ due to the sounds they make at night.

The most striking feature of frogmouths that truly separates them from similar birds is their eyes. They are huge and bright yellow, meaning that they often illuminate the night sky. While their bodies camouflage perfectly into the tree trunks on which they rest, their eyes are a giveaway for birdwatchers and passers-by.

The breeding process will take place every year of their lives, with female frogmouths typically laying 1-3 eggs each year. Once hatched, these baby frogmouths will be raised in the nest by their parents until they are ready to find a mating partner of their own.

In terms of their diet, you can expect to see these nocturnal animals eating insects and small mammals native to woodland/forest areas, such as snails, slugs, snakes, mice and rats. 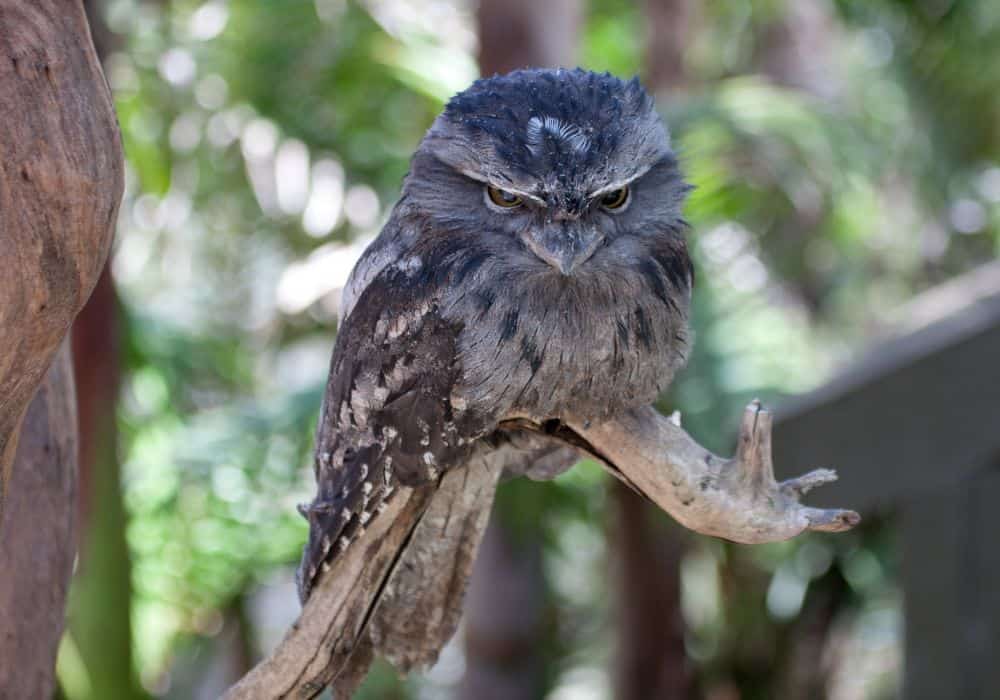 The symbolism of frogmouths has been widely discussed throughout history in Australia and beyond, mainly due to their allusiveness. Many people interpret these nocturnal birds in certain ways and use them as inspiration for their lives.

A creature of the night

One common symbolic association with frogmouths is all to do with mystery. Many people are wary of them due to the fact they are creatures of the night who can move in silence. However, as they aren’t known to ever attack humans, perhaps we should use them as a symbol to trust something or someone regardless of whether we can see them or not.

Sometimes we can get embroiled in self-doubt and paranoia, but these birds are perfect examples of the purity of the world. Not everything has to be visible to be believed.

Sometimes, as humans, we can be guilty of only listening to people once they are the loudest person in the room. This is also very relevant when it comes to frogmouths. Their large beaks and gaping mouths are known to create loud noises through the night.

In fact, frogmouths are far more commonly heard than seen. This is symbolic of today’s society where certain groups of people are so ostracized they have to shout louder than necessary just to be heard. Frogmouths are the perfect symbol of that.

Luck is on your side

As we have already mentioned before, encountering frogmouths isn’t something that is a common occurrence, even if you find yourself walking through an Australian forest in the middle of the night. These birds aren’t the most sociable and will avoid human contact wherever possible.

If you do have the fortune of encountering this magical bird then you should take it as a sign from the universe that good things are on the way and that you have luck on your side. This should inspire you to make more positive risks in your life. 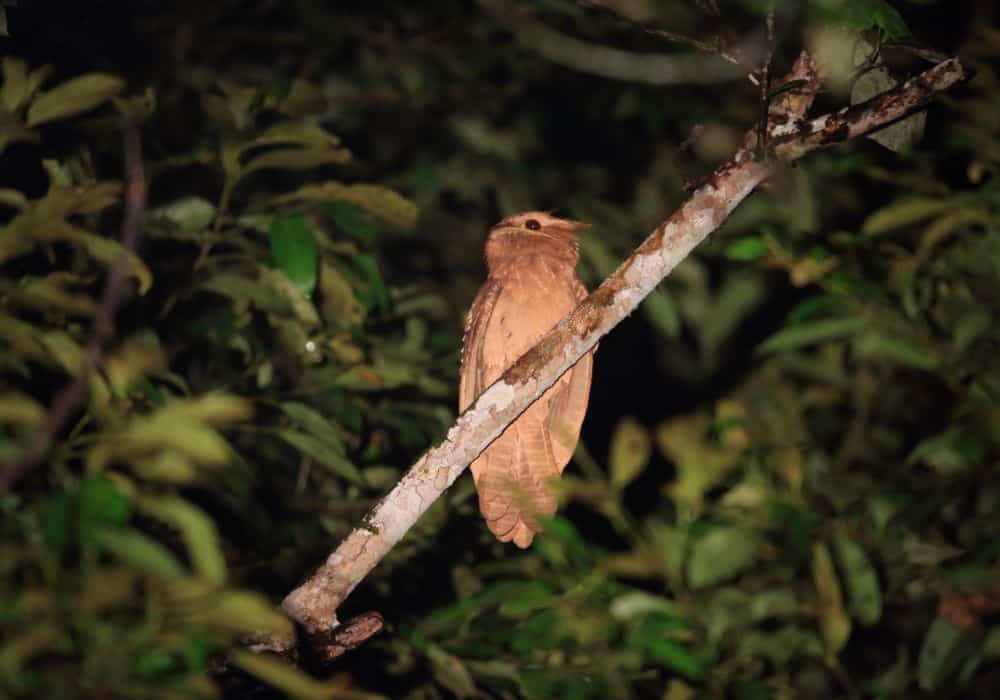 The meaning that frogmouth stands for also varies among different cultures owing to diverse circumstances.

Frogmouth Symbolism in the Jindibah Community

Jindibah is a 113-acre stretch of land in New South Wales whose inhabitants are very fond of frogmouths. They are deep believers in the symbolism behind frogmouths and see them as their protectors.

They say that frogmouths remind them that they are never alone, especially during times when they are feeling at their lowest. All in all, these birds bring a lot of comfort to the community in Jindnibah.

In aboriginal culture, the call of a frogmouth means that someone is about to die. As a result, the importance of these creatures to aboriginals cannot be understated as they essentially use them as a way to prepare for the death of a loved one.

Nyungar culture refers to the Noongar – the original inhabitants of Western Australia – and the folklore in this culture speaks of how the frogmouth is symbolic of sorcerers. This is largely down to their nocturnal nature with the darkness of the night associated with ghosts and supernatural spirits. 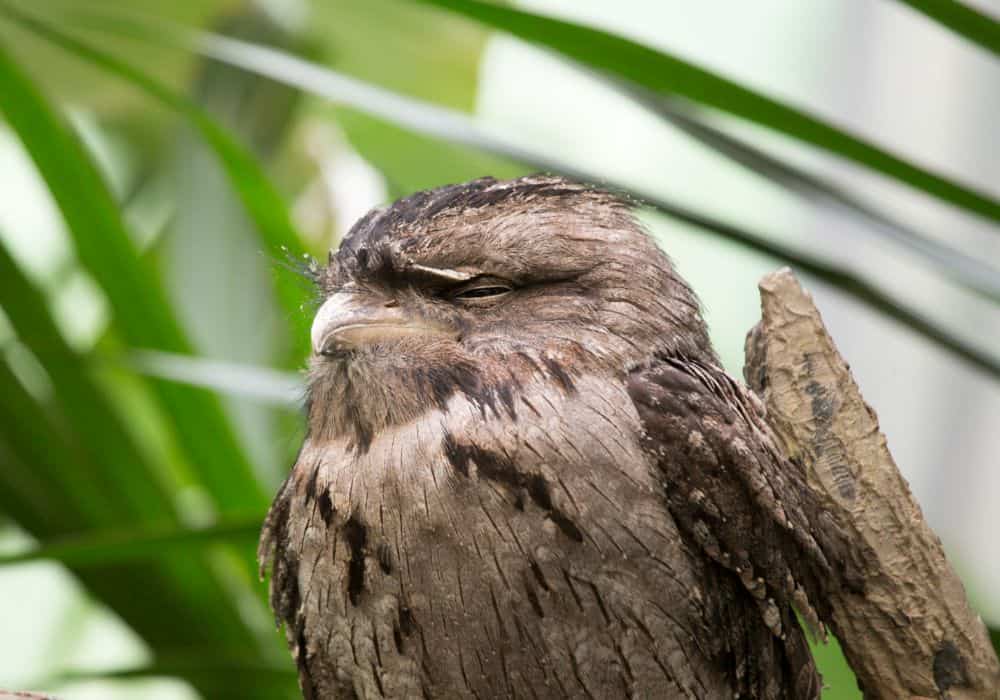 Totem animals are very important aspects of certain cultures. Each person within a family will have different totem animals throughout their lives and these animals are meant to guide you and help you on your journey through life.

The characteristics of your totem animal are meant to match your own, and frogmouths have been known to be used as totem animals in some cultures.

Those with a frogmouth as their totem animal are meant to be individuals who prefer a quiet life in small groups. They aren’t particularly sociable and are happy to simply blend into the background during their life, despite having plenty to say.

They are also keen observers and can analyze certain situations closely without drawing attention to themselves. Due to this, they are very good listeners and are often used by others as a shoulder to cry on.

For spiritual people, power animals are seen as animals that we can call upon when the going gets tough. If we are ever in need of help or support then our power animals will be there to give us exactly that.

If a frogmouth is your power animal then you are in luck because they will always be watching over you, ready to aid you if you need them.

You are likely an observant individual who cares more for loved ones than yourself so your frogmouth power animal is there to do the same for you.

Spirit animals have become more mainstream in recent years due to people claiming all sorts of objects and animals are their spirit animals for humorous purposes. However, the matter of spirit animals is no laughing matter for many people all over the world.

Your personality will match the characteristics of your spirit animal and they will appear to you out of the blue from time to time to offer you guidance.

If you are shy and reserved when meeting strangers for the first time, but you come out of your shell once comfortable with your surroundings, then a frogmouth may well be your spirit animal.

Dreaming about frogmouths isn’t something that should just be brushed away as coincidence, at least in certain cultures anyway. If a frogmouth appears in your dream then it could mean that you are about to discover something incredibly rare. This may well be something physical such as a certain coin or a stamp or something symbolic such as true love.

Additionally, if you have been searching for information about something important to you for a long time, then the appearance of a frogmouth in your dream should act as inspiration to keep going because the answer won’t be far away.

While you may well have not known an awful lot about these birds before reading this article, you should now know all of their key characteristics and habits. In addition to this, you should also now be more culturally aware of what these birds mean to certain groups and the symbolism that surrounds them.

If you ever do find yourself in a woodland area or forest late at night, then make sure to look up and see if you can spot any bright orange eyes glaring at you. The chances are, you’ll be looking at a frogmouth.