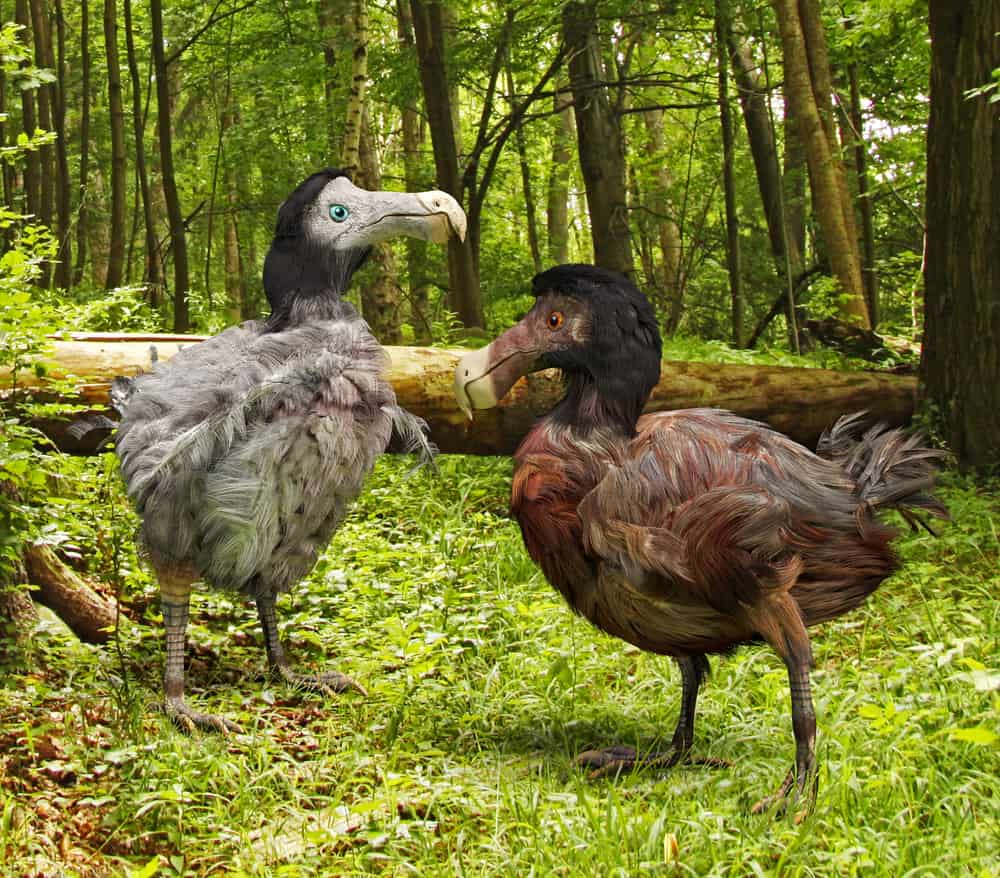 The dodo (Raphus cucullatus) is a species of bird that cannot fly and has become extinct since 1662. One of its closest modern relatives is the Nicobar pigeon. Due to their early extinction, dodos are often depicted inaccurately as clumsy and large flightless birds. However, their biology indicates they were much slimmer and more agile birds.

Dodos were native to the island of Mauritius, located off the East African coast, close to Madagascar in the Indian Ocean. Other than Mauritius, there haven’t been any other places where the dodo has lived.

Since it became extinct less than 100 years after its discovery by humans, it doesn’t hold as many symbolic meanings. Still, there are some aspects of life, including spiritualism, where the dodo has a special place.

Keep on reading to learn more about dodo symbolism! 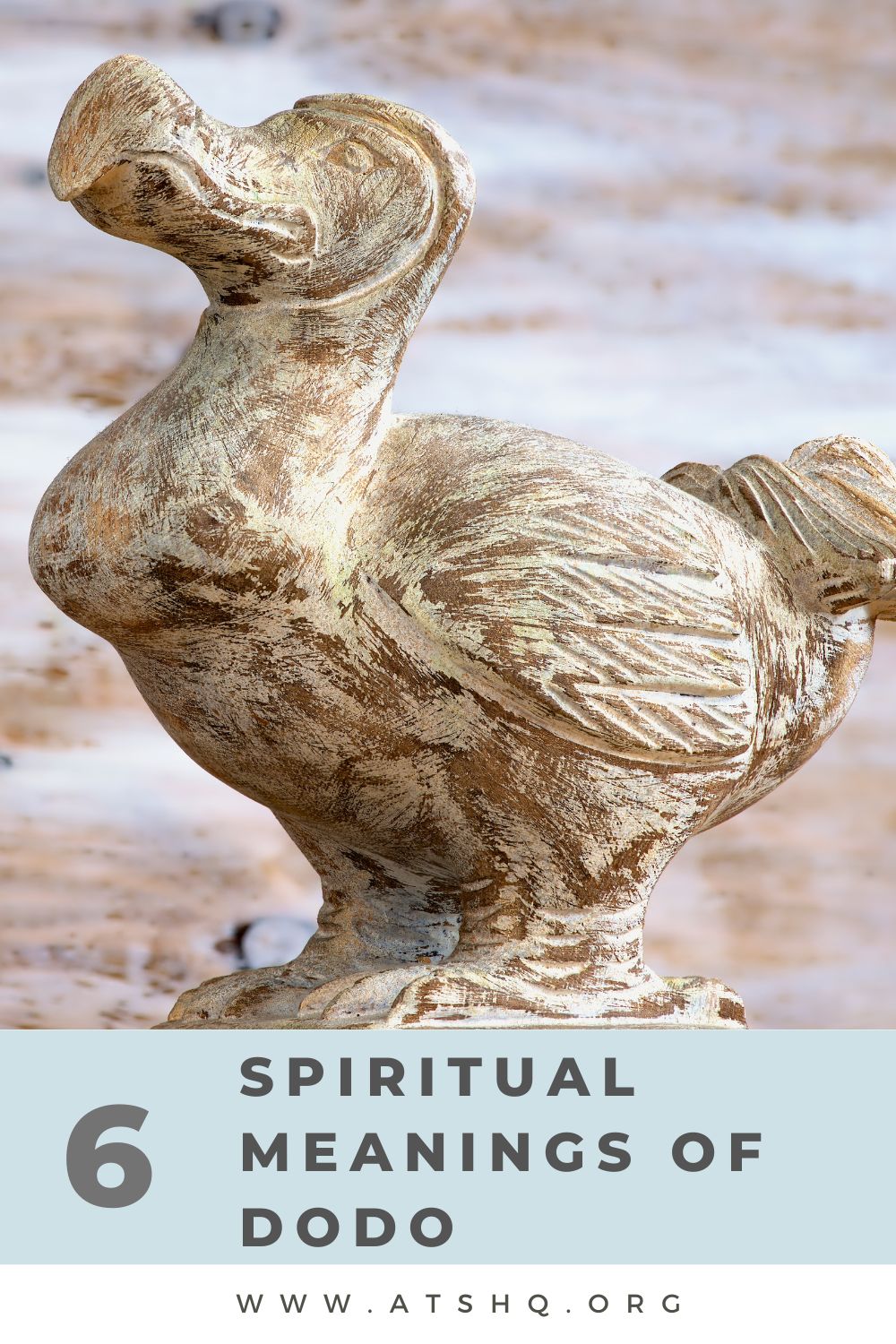 The dodo bird usually symbolizes goofiness, clumsiness, and overall stupidity. Even its name originates from the Portuguese word “doudo”, which means “simpleton” or “fool”. When the first Portuguese sailors set foot in Mauritius in 1502, they saw a seemingly simple bird with no real skills and no ability to fly. Thus, they named it dodo and described it as stupid.

Another symbolic meaning for the dodo is that of death and extinction. This is due to the dodo’s very short-lived history. Since the Portuguese sailors were not interested in the island of Mauritius, it was actually the Dutch that first settled the island in 1598. Less than eighty years after contact with humans, the whole dodo population was eradicated.

Some claim that dodo extinction was inevitable due to its low intelligence and adaptability. However, most people would agree that the bird simply couldn’t adapt to the new circumstances. Thus, the dodo is also considered a symbol of adaptation and conservation. Humans should always look to maintain the balance in nature to avoid other species going extinct.

While the dodo bird is no longer present on the island of Mauritius, it still holds a special place in the people’s culture. After all, before the first Dutch settlement, there were no humans on the island. Therefore, dodos are often regarded as the natives of Mauritius.

Mauritians greatly respect the dodo bird despite its goofy and clumsy depiction in art and fiction. The dodo appears prominently on the coat of arms of Mauritius, as well as on gold coins that are used as currency on the island.

Because the lifespan of the dodo among humans was so short, there aren’t any widespread tales or myths about it. The closest ones are fictional tales about dodos jumping off cliffs or into volcanoes that show the low intellect of this clumsy bird. However, most of these stories are inaccurate and unrealistic.

The fact that dodos died off into extinction only a few decades after being discovered by humans is a mystery in its own. So much so that when people visited the island of Mauritius years after last seeing a dodo and found no dodos, they were convinced that they never existed.

Solid proof that dodos were actually a part of the Mauritius ecosystems came in the 19th century. That was when biology grew as a science and established the modern system for species classification.

The most popular depiction of the dodo bird in fiction is the one from Alice in Wonderland by Lewis Carroll (Charles Lutwidge Dodgson). A popular belief states that the dodo is actually a representation of Dodgson himself. Because he had an issue with stuttering, he would often introduce himself as “Do-do-dodgson”.

One common dodo symbolism in dreams is that of an imminent ending. If you’re having trouble dealing with a bad circumstance or habit, dreaming of a dodo might indicate that you need to eliminate it from your life immediately. If the dodo is together with another person in your life, it might be time to let them go, as they may be holding you back.

If, on the other hand, you are a more reserved individual who rarely opens up to others, a dodo bird in your dreams might signify that it’s time to relax and express yourself more. While being careful about who you trust can be beneficial, it can sometimes prevent you from getting to know others. This can eventually lead to you being isolated and lonely.

Since there is very little information about the history of dodos, their appearance in dreams can sometimes indicate an unsolved mystery. Because these birds are now extinct, studying their actual habits and behaviors is impossible. Thus, their true nature will always remain a mystery to humanity. 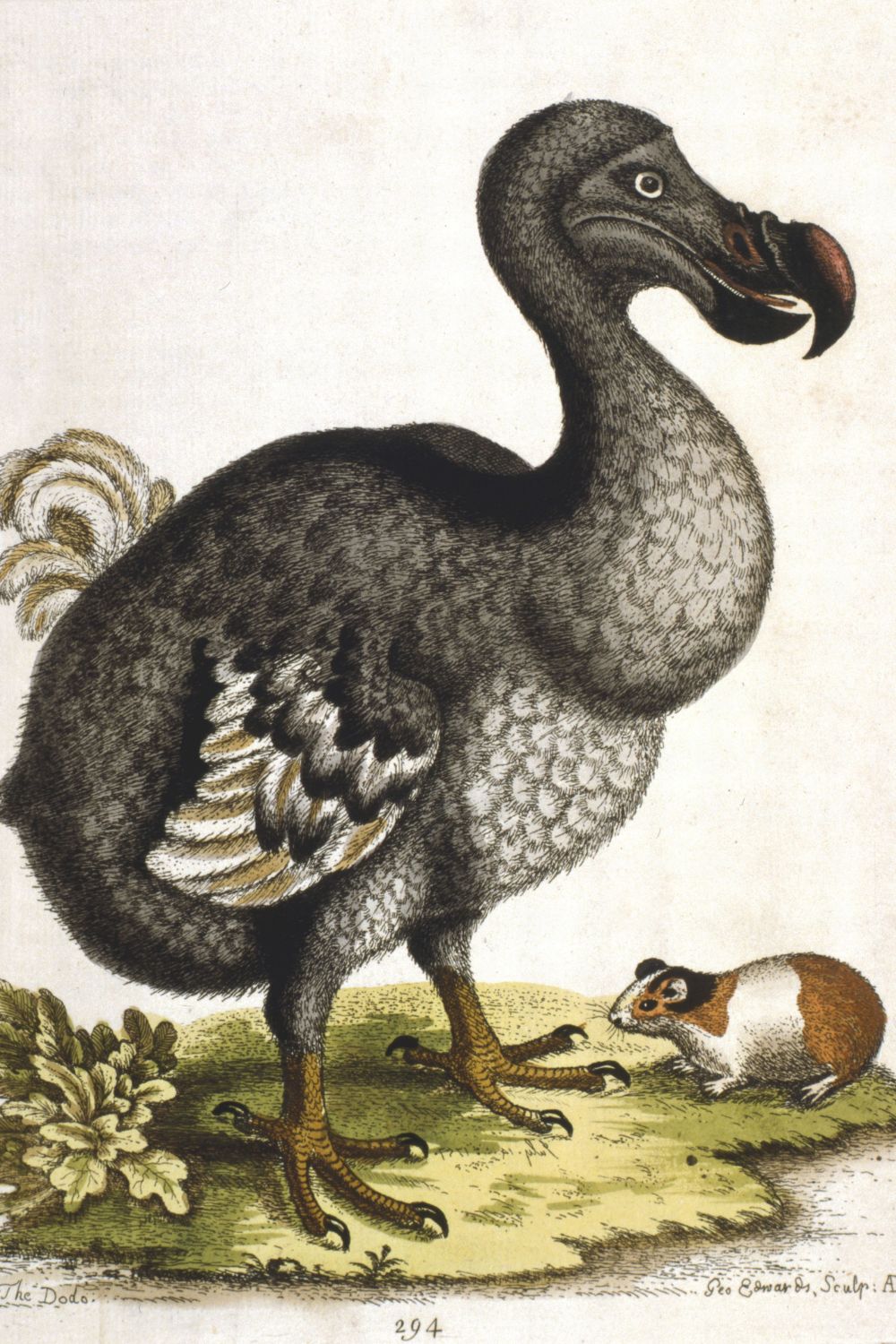 Remember that tattoos are very personal and can have different meanings depending on each person. In general, a dodo tattoo symbolizes extroversion and even goofiness. However, while this person might seem goofy on the outside, they may hide their true inner intellect.

Also, the dodo bird tattoo might symbolize the ending of a habit or situation that has held the person down for a while. Finally, it can even be a reminder of home for a Mauritian individual.

People who have the dodo bird spirit animal are usually highly extroverted and outgoing. They form new relationships with people very easily, which sometimes makes them seem shallow or superficial.

But, that’s far from the truth, as these individuals genuinely believe that all their relationships have deep meanings. Nevertheless, this can sometimes make them unable to distinguish deep connections from frivolous affairs.

If the dodo bird spirit animal appears in your life suddenly, it might indicate that you need to reevaluate your trust in people. Some individuals might view your careful and timid approach as insulting. But, in the end, those truly worthy people will show the necessary patience to help you build a relationship.

Since humans trespasses in the dodo’s habitat, the dodo spirit animal might be trying to tell you that someone is trespassing in your life. However, with the help of the bird, you’ll be able to overcome them and regain your territory.

While dodos are often considered foolish birds, the dodo spirit animal might be trying to show you that your intellect is way higher than you think. Sometimes, our true intellectual ability lies in something we haven’t tried before.

Other times, your brilliance is just not understood by many people. Thus, you’ll need to find and trust the right people who will really love you for who you are.

Individuals with the dodo bird totem animal are often associated with naivete and innocence. Since dodos didn’t really connect with humans, they had solid ties to nature. Just like the bird, people with the dodo totem are often fascinated by the small details in nature. They will notice small changes in a forest and often stop picking up flowers on the way.

The dodo totem also grants you with a constant passion for travel and exploration. You always want to do new things and meet new people. However, you should be careful with the people you meet. The dodo’s curiosity and willingness to meet humans were partly the reason for its extinction.

Your natural instinct is to always trust that people want the best for you. But, that’s not always the case, which often disappoints you. Nevertheless, your optimistic spirit will quickly kick in and cheer you back up! Still, try to have a more conservative approach to new people, as it will allow you to spot the truly worthy ones.

If you feel like you have lost the innocence of your inner child, call upon the dodo bird power animal. It will help you take a step back and enjoy the small things in life a little bit more. It will also transmit its inexhaustible optimism to you.

The dodo power animal may also be useful if you can’t seem to communicate with your peers well. The bird will give you the power to deliver your message loud and clear and speak directly to people’s hearts.

If you feel that your life is stagnating, you can invoke the power dodo bird to help you change. Despite the dodo’s inability to adapt its life to the presence of humans, the dodo power animal will empower you to take the next step and change your life.

The story of the dodo bird is a truly unique one. These birds were living their lives happily for hundreds of years on the island of Mauritius until humans arrived to change them forever. The dodo’s ignorance and curiosity to meet humans is inevitably what led to its disappearance.

You should learn from the dodo’s experience, especially if it is a part of your spirituality. The willingness to give everyone the benefit of the doubt might be strong, but you should always be wary of people. This way, you’ll avoid the dangerous, while the good-willed ones will show the necessary patience to develop a meaningful relationship.