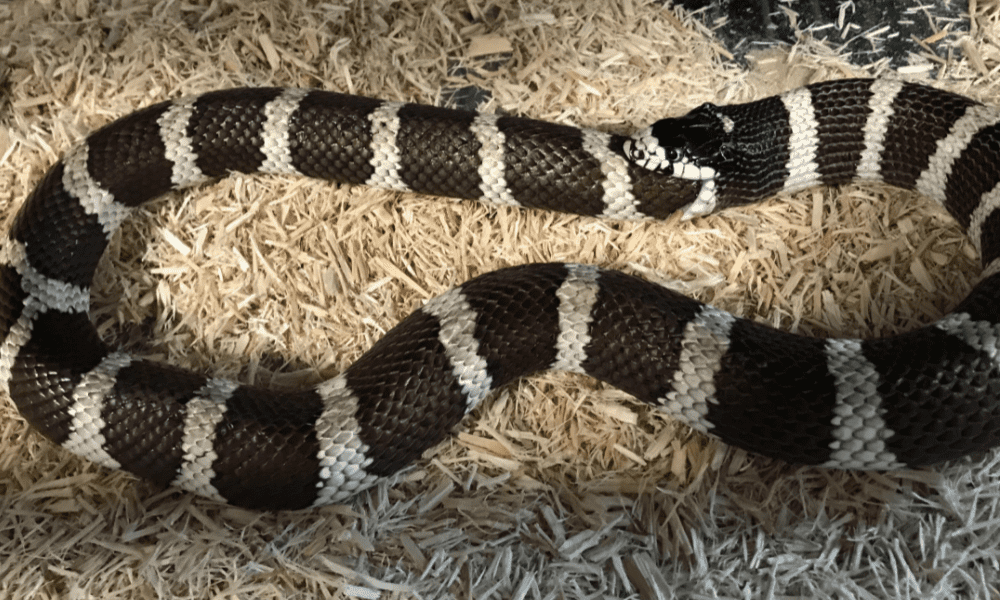 You may have ended up here because you saw photos or videos online or perhaps even because you caught your pet engaging in this behavior itself, but one thing’s certain – witnessing a snake trying to devour itself is a pretty disconcerting and horrific sight.

It makes absolutely no sense for snakes to bite themselves or swallow their own tails, but although this behavior is rare, it’s far from unheard of. So to try to shed some light on this seemingly inexplicable act, here we answer the question, why do snakes eat themselves?

If you want to see for yourself what we’re going to be talking about, you can also check out this video before reading on – but be warned, this is some fairly gruesome content that’s not for the faint of heart!

What happens when a snake eats itself?

For those who haven’t seen it before – and who didn’t dare click on the link above – what happens when a snake eats itself?

There are two possibilities, and the first is probably what you would imagine – sometimes snakes will literally grab the end of their own tail and start swallowing it.

Once the tail is in their mouth, it is then forced down the snake’s throat and into its stomach just like a prey animal.

Alternatively, snakes have also been known to bite into their own bodies, sinking their fangs into themselves the way they would with any animal they want to eat.

The first version of this behavior shows up in an ancient symbol known as the ouroboros that depicts a snake swallowing its own tail.

The ouroboros dates back to at least Ancient Egyptian times and has a positive connotation, representing the cycle of life, death and rebirth. However, when it happens in real life, there’s nothing positive about it for the snake, so what could possibly drive them to do it?

Let’s have a look at that now.

Some possible reasons why snakes eat themselves

Although snakes eating themselves is a documented and relatively well-known – if uncommon – occurrence, science still doesn’t have a definitive answer as to why it happens.

There is probably more than just one single reason why snakes try to swallow themselves, but the fact they have small brains and display reactive rather than proactive behavior probably contributes.

In other words, snake behavior is driven by reacting instinctively to external stimuli, but if something is wrong with the snake, normal reactions can be thrown off. This effectively results in a malfunction that can lead to unusual behavior – like the snake trying to eat itself.

Here are some of the most plausible theories for what can cause it:

Snakes, like other reptiles, are cold-blooded, which means they don’t have the ability to control their own body temperature.

They are what’s known as poikilotherms, which means their body temperature can vary greatly, and they rely on the temperature of the external environment to regulate it. This is why snakes and other reptiles often sunbathe in the morning to warm up.

Unlike mammals, which can sweat or pant to cool down, if a snake gets too hot, it then needs to seek shade to cool down.

However, when snakes become too hot and are unable to cool down, they can become confused and disorientated, and in this unsettled state, they may be unable to distinguish their tail from a prey animal, causing them to try to eat it.

This is more likely in captivity than in the wild since their captive environment gives them less opportunity to seek out warmer or cooler places as required. This is especially true if their tank light is left on too much or they don’t have a cool area to hide in.

Also related to overheating, if a snake is unable to cool itself, its metabolic rate may rise, and this can result in hypermetabolism. In this state, a snake’s body is fooled into thinking it is hungry when it isn’t – and when this happens, the snake may try to eat anything it finds.

When a snake is suffering from hypermetabolism, it may hunt and eat prey that it would otherwise leave alone, or it might hunt when it doesn’t need to eat. In this condition, it could then be fooled into thinking that its tail is prey and try to eat it.

It is also likely that a state of hypermetabolism coupled with the disorienting effects of being unable to cool itself may result in a snake trying to eat its own tail since it has an insatiable urge to eat while its mind is also in a confused state.

Snakes that suffer from stress may also try to eat themselves as a manifestation of psychological disorder.

Snakes can be sensitive to a range of stress-inducing factors such as living in a small tank, excessive noise, excessive light, being handled too often, an irregular feeding schedule, a tank that is too hot, a dirty tank and more.

Animals react to stress with a range of displacement behaviors, and in snakes, one of them could be trying to eat themselves.

Another possibility is simply that the snake is extremely hungry because it isn’t being fed enough.

Think about how your head goes fuzzy and you begin to make poor decisions or become irritable when you don’t eat. The same is true for snakes, and a starving snake that is also not thinking clearly can easily mistake its own tail for prey.

An interesting idea is that snakes can occasionally try to eat themselves when they are shedding their skins.

When they shed, they also shed their eye caps, which temporarily impairs their vision. At this time, they may mistake their tails for food and try to consume them.

If a snake is kept in a small tank, because it doesn’t have enough space to stretch out, it may see its tail and mistake it for a prey animal or an enemy.

It is easy to see how this could combine with a period of reduced vision, hypermetabolism, stress or hunger to increase the possibility of this behavior occurring.

Then, when it sees its tail – perhaps when in a confused or stressed state – the predatory instinct may be awoken, and the snake reacts by attacking its own tail, mistaking it for prey.

It is known that certain species of snakes are more likely to try to eat themselves, and it just happens that these snakes are mostly the ones that prey on other snakes in the wild, which tends to support this theory.

It has also been remarked that old snakes or those suffering from chronic illnesses are more likely to attack themselves. The reason for this is unclear, but if you have an older pet snake, be aware that this behavior is more likely to occur than with older animals.

Is it dangerous for snakes to try to eat themselves?

If your snake tries to eat itself, should you worry?

In a word, yes – this is not some kind of harmless behavior like a baby sucking its thumb.

If a snake tries to swallow itself, it can easily get stuck. Part of the problem is that many snakes have evolved backwards-pointing teeth that prevent prey from escaping from their jaws, but when they start eating themselves, this makes it hard to let go, even if they realize their error.

With their own body stuck down their throat, snakes can suffocate. If they have bitten themselves, the punctures from the teeth may cause serious damage, and the snake can also suffer from blood loss. Even if the snake lets go, infection can also set in.

If the snake continues to devour itself, it may go into shock as it begins to digest its own body, and this will inevitably lead to a rather unpleasant and gory death.

What should you do if your snake tries to eat itself?

Clearly then, if you come into a room and find your pet snake trying to swallow its own tail, you need to act quickly, potentially to save its life.

As we noted, one reason for a snake to engage in this kind of behavior is that it is too hot, so the first thing to do is to switch off the tank light and try to let the snake cool down. You might also help by spraying it with some water or placing it in a bowl of water.

If you do this, the snake may release itself and disaster will be averted – but those backwards-pointing teeth may make this difficult, in which case the snake will need some help.

It’s probably not a good idea to try to pry the snake’s mouth open yourself, so the best course of action is to get it to a vet as quickly as possible. The vet will then have a good chance of saving the snake before it’s too late – something that has been known to really happen!

If your snake bites its tail or even part of its body just once then learns its lesson and lets go, there’s probably nothing to worry about. However, if this behavior becomes a habit, there’s something wrong with your animal, and you need to take it to a vet.

How can you prevent a snake from eating itself?

Since snakes eating themselves is never a good thing, it’s much better to make sure they never do it in the first place rather than trying to save them after they decide to start snacking on their own rear end.

This means you should make sure you provide a comfortable environment for your snake to live in with enough heat but also with the opportunity to cool off if it needs to. Giving it a small pool of water to submerge itself in is a good idea.

Many snakes are sensitive to light, and you need to take care to give it enough periods of darkness as well as light. Think about how you would feel if the light was left on 24 hours a day – and it’s no different for snakes, especially nocturnal ones.

Finally, make sure that your snake’s tank is large enough for the species you are keeping.

In a word, happy, comfortable, well-fed snakes are far less likely to try to eat themselves, so try to provide your pet with the best possible living conditions to thrive, and there will be less chance of it engaging in this bizarre and unsettling behavior.

Can venomous snakes poison themselves?

You may also be wondering whether a venomous snake can poison itself by biting its tail, and the answer is no.

Snake’s bodies naturally contain the antibodies necessary to fight their own venom, so if they bite themselves, the venom will be converted to harmless proteins and ejected by the kidneys.

The same will happen if a venomous snake bites a member of its own species – but if it bites another type of snake, the venom will have the same effect as it would on any other animal, and if the venom is potent enough, the bitten snake will die.

As you’ll know by now if you watched the video at the top of this post, seeing a snake trying to devour itself is unsettling, to say the least. However, although it is known to happen, it is a thankfully rare occurrence, so it’s something you are probably unlikely to ever see for real.

That said, as a snake owner, it’s important to understand why this behavior can happen because this can help you provide an environment for your snake that will minimize the risk. And if the worst happens and your snake starts eating its tail, you’ll also know what to do.