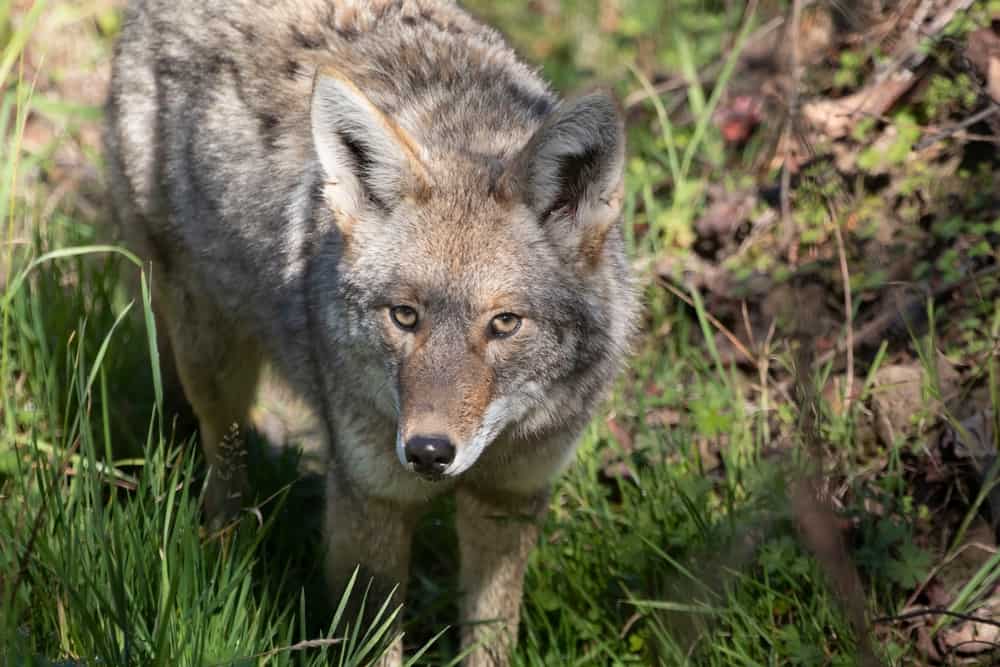 Ever been out on a hike near dusk when a mysterious dog crosses your path unexpectedly? If it doesn’t have a collar, it’s likely it’s a coyote. One of the most cunning animals in North America, they’re sneaky and elusive like the fox but also strong and persistent like the wolf.

Coyotes have been interacting with humans for millennia, which explains why different cultures and religions view them as symbolic. They’re also staples in many different mythologies and folklores, and even today they’re referenced all the time in pop culture.

To know more about coyote symbolism, coyote meaning, the coyote spirit animal, and other interesting and relevant information read through this article. 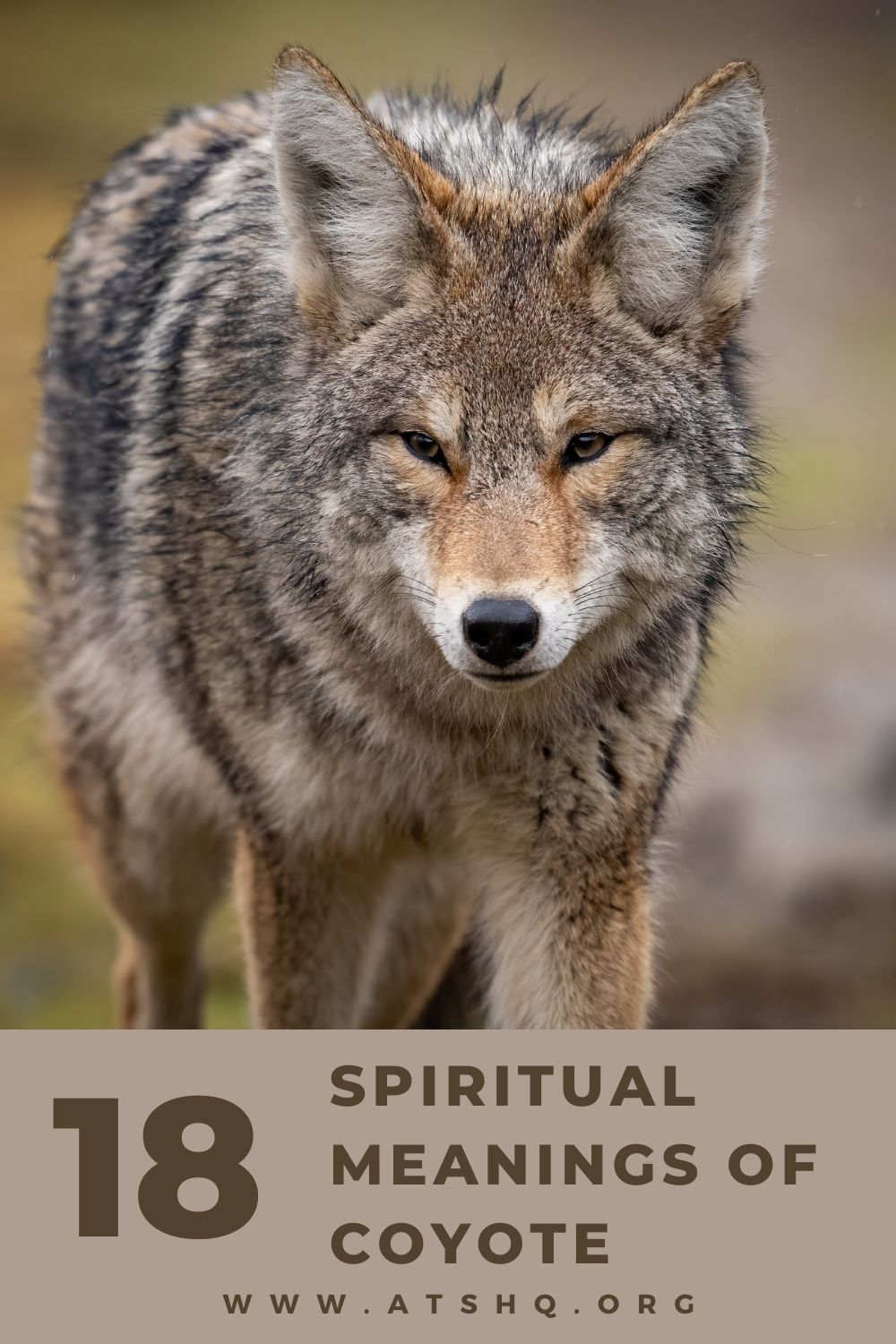 What Traits Are Coyotes Associated With?

As is the case with all animals, a range of qualities is associated with coyotes. That being said, every culture across the world doesn’t attribute the same traits to coyotes.

Over time, a lot of factors have influenced the relationship humans and coyotes share. But in general, coyotes are seen as deceptive, mischievous, intelligent, flexible, and wise. Now let’s break each of these traits down a little more.

Much like the fox, the coyote is deceptive, usually when it’s trying to get a meal. And it won’t just fool animals but humans as well. All options are on the table when a coyote goes hunting, and usually, it relies on its unparalleled adaptability to secure food in the most low-key way.

Even though a coyote is small, it’s incredibly elusive, so it can surprise a large animal, like a deer, and make it helpless prey.

Coyotes are often representative of intelligence and patience. That’s because they can sit and wait for their prey to come to them, and they immediately know the best available way to take down their prey once they engage.

They will carefully stalk before striking, and this is what allows them to take down bigger animals. They don’t force opportunities, rather they take advantage of opportunities as they come. 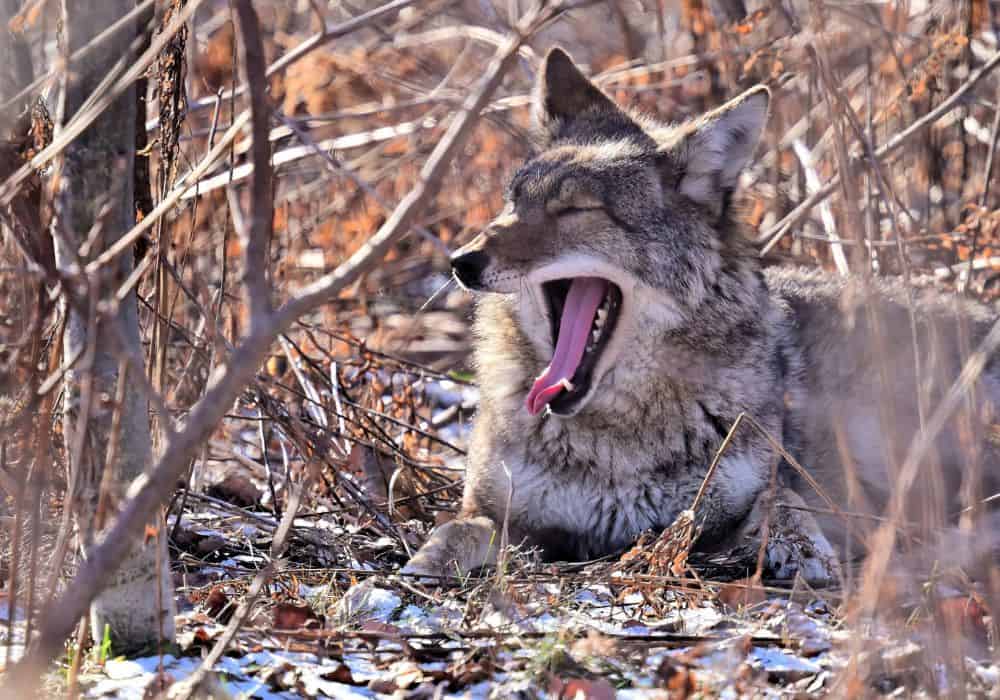 A coyote must be flexible to survive in the wild. Some are even so flexible that they can survive in sprawling cities. And any farmer who has to deal with coyotes on a regular basis will tell you that these creatures always find a way to get at livestock.

Coyotes are also known for being mischievous. When the coyote is not out hunting for food, it’s playing around with the other coyotes in the pack. This is a quality that a lot of cultures associate with the coyote, especially Eastern and Native American cultures.

Because they are naturally shrewd, they are a symbol of intelligence in many cultures. This is why a lot of stories depict a coyote as some kind of guide. They are also associated with the spiritual realm because of how in touch they are with nature.

But this is just how coyotes are thought of broadly. Let’s see how they are seen as symbols on a culture-by-culture basis.

How Coyotes Are Symbolic to Different Cultures 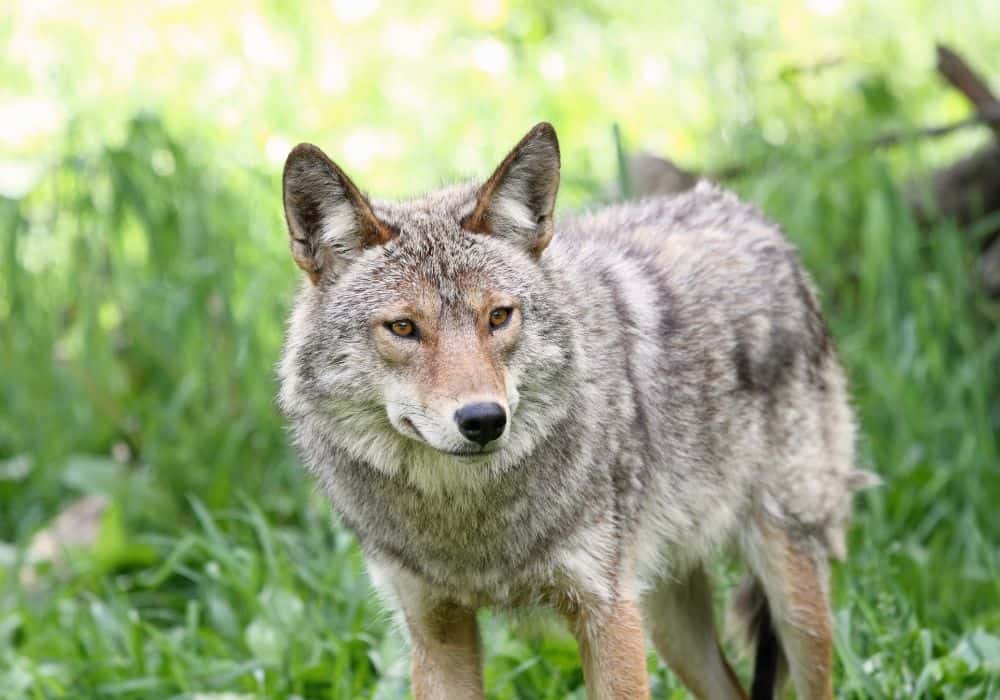 Although coyotes are mainly found in North and Central America, similar canine species exist throughout the world, and cultures in far-off places view these canines a lot like how cultures view coyotes (where these animals are common).

The symbolism of a coyote has a lot to do with how the creature has interacted with the local humans for centuries. But in all cases, the coyote is never viewed as a 100% benevolent force, as its chief priority is hunting, which often means stealing from humans.

Here’s what cultures from around the world have said about coyotes:

The coyote is a fundamental part of Native American symbolism, culture, and folklore. That being said, every tribe didn’t interact with coyotes the same way. Some tribes saw the coyote as an evil creature, one that used its intelligence and elusiveness to make the lives of human beings harder.

But then there were other tribes that saw the coyote as the embodiment of playfulness. Whether they saw the coyote as good or bad, most Native American cultures acknowledged that this animal is incredibly cunning and quick to adapt.

The Navajo believe the coyote was around during the beginning days of the earth, and they say the coyote is the one who brought destruction and death to the earth.

It’s even said that a coyote caused a massive flood when the world was young. And healers would often call on the spirit of the coyote for spiritual meaning, as these animals were closely associated with wisdom.

Not often is an animal symbolic of both creation and destruction, but the coyote is. One Native American story that involves coyotes is a cautionary tale, one which advises the reader to stay clear of these shrewd operators.

Then there are the tribes that believe the coyote plays a major role in the cycle of life and death, dispensing justice fairly when human beings harm each other and their environment.

Some tribes believe that the coyote brought the gift of storytelling and music, while others believe the Apache got fire thanks to the coyote. And it’s been said that a coyote healed several wounded Kiawah warriors.

In eastern cultures, coyote-like dogs are referred to as “Kitsune.” While these mainly resemble foxes, they are thought to have high intelligence and even supernatural abilities.

In this way, they are seen like how ancient Native Americans saw coyotes. They can be either good or evil, though they are infamous tricksters who play pranks that often end in destruction. They can also be shape-shifters. 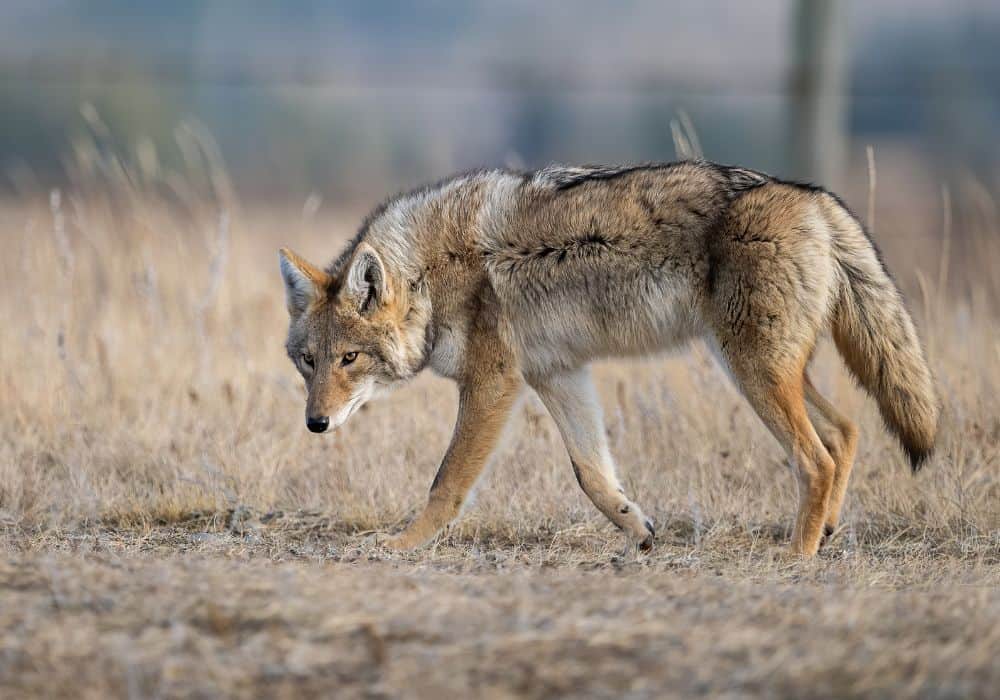 In Celtic culture, the coyote is not mentioned, as these people were more familiar with jackals. But since jackals and coyotes are pretty much the same, it’s safe to say the Celts would’ve viewed coyotes similarly to how they viewed jackals.

They saw jackals as being chaotic, and this is why they were associated with Morrigan, the goddess of chaos. But Celtic warriors saw jackals as powerful, which is why they often painted jackals on armor. They were also seen as being faithful and ferocious with incredible intelligence.

The ancient Egyptians held dogs in high regard, especially jackals. This explains why the god of death, Anubis, has the head of a jackal. The Egyptians associated jackals with death because they were scavengers.

However, the jackal played an important role in Egyptian mythology. Specifically, it was a jackal that carried Horace, the pharaoh of the gods, over a river.

There’s also another story in African folklore, one which involves a jackal outwitting a lion. Essentially the jackal tricks the lion into hunting for him, and when the lion gets wise, the jackal uses its instincts and slays the lion using a cunning trap.

Central American tribes have often depicted the coyote-like northern Native American tribes. In one story, the coyote steals a bag of stars from the fire god, and once caught he scatters the stars after deliberately placing the “coyote star.” This is one story that depicts the animal as a trickster.

The Aztecs believed in a coyote man who could shape-shift, make merriment, create music, and accentuate passion. He taught special songs and dances to the people, though often his enjoyment would come at the expense of others.

In Christianity specifically, the jackal (which resembles a coyote) is referenced many times in the Bible, and almost always the reference is not a positive one. Unlike other cultures that see the coyote as playful and understanding, Christians often see the coyote as symbolic of death and destruction.

Buddhists associate the jackal with death. Moreover, Buddhists are often encouraged to meditate on thoughts regarding the jackal, as such meditations are thought to help one understand how to handle death.

In Hinduism, many gods are associated with jackals. Take Parvati, for example, who in most depictions is riding a jackal. Then there’s Kali, the god of death and destruction, who is also sometimes depicted riding a jackal.

Jackals can sometimes be associated with Shiva as well. Since jackals are so closely associated with major deities in Hinduism, Hindus refuse to harm jackals, coyotes, and other wild dogs.

Coyote Symbolism in Folklores and Mythologies

According to Pima mythology, the coyote had a hand in the invention of cremation. Specifically, after a rattlesnake delivers a fatal bite to a rabbit, the local community tries to hide the deceased rabbit from the coyote by burning it. But the coyote still tries to eat it, and this poor decision results in the coyote’s mouth turning black.

The Achomawi people also told stories about coyotes, and one tells of how coyotes got their ravenous nature. A prideful coyote challenges a great cloud to a race, and the stakes were this: if the cloud won, they’d ensure fair weather at all times. But if the coyote lost, the cloud had the freedom to do whatever it wanted.

During the race, the coyote gets distracted, and as a result, the cloud wins. And this is why, according to the Achomawi people, it rains sporadically.

Probably the most well-known coyote reference in pop culture is Wile E. Coyote. In every cartoon, Wile E. Coyote tries to catch his nemesis, the road runner, but he always ends up getting outsmarted. This dynamic is ironic, considering coyotes are supposed to be highly intelligent.

There’s also a movie called Coyote Ugly, which refers to the fact that a coyote will gnaw off its leg if it means doing so will free it. In the movie, the female characters refer to unattractive men as “coyote ugly”—meaning a woman can’t get away from such men fast enough.

Coyotes have also been referenced in music, literature, and artwork. In North America coyote references are particularly common in pop culture, mainly because coyotes are native to the continent.

The coyote spirit animal is resourceful, cunning, wise, playful, mischievous, and never without a good sense of humor. However, this spirit animal’s weakness is that it’s lazy. But laziness isn’t too much of inhibition, as the coyote can use its incomparable intelligence to find shortcuts.

Those who call on the coyote spirit animal are typically pranksters by nature, and often they’re individuals who get a laugh at another’s expense. But a coyote can be loyal and protective, so one can call on this spirit animal when they need reliable protection.

Particularly in Eastern cultures, both white and black coyotes are significant. In Japanese and Chinese mythologies, for example, the white coyote is representative of the constant fight between good and evil. A white coyote is also a sign of divine intervention.

It’s also believed that a person who has the angelic spirit of a white coyote on their side is able to overcome whatever challenges they face. And since these coyotes are so rare, if you see one this could indicate a life-changing event is just around the corner.

A black coyote, on the other hand, is synonymous with evil. And a black coyote isn’t just feared in Eastern cultures—the Celts too wanted to avoid these animals at all costs. But in Korean culture, the black wild dog is actually seen as courageous and loyal.

Moreover, in some Western cultures, the black coyote is thought to be representative of the fact that life is ever-changing.

Even though coyotes are mainly found in North and Central America, they are significant and symbolic to faraway cultures because they’re a lot like jackals, foxes, and other wild dogs.

Although they are often associated with negative qualities like deception and viciousness, they are seen as intelligent and spiritually-connected by a lot of communities.

So the next time you come across a coyote, be careful of course, but don’t be so quick to think that the encounter is a bad sign! This animal may play a few jokes on you, but in the end, there’s a lot of benefit in paying respect to the coyote’s spiritual meaning.