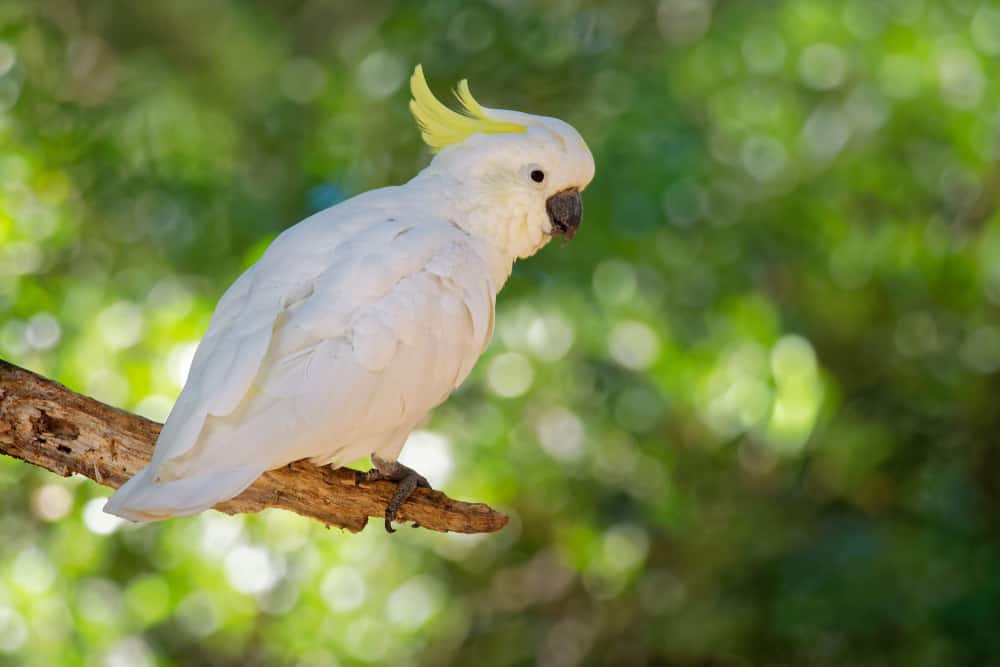 Cockatoos are a family of parrots that consists of 21 unique species. The cockatoo family is separated into the genus Calyptorhynchus, which contains five black cockatoo species, and the genus Cacatua with 11 white cockatoos and four birds with unique colorways.

The cockatoo can usually be found in the Australasian region. Specifically, it inhabits places like Australia, New Guinea, the Solomon Islands, Indonesia, and the Philippines. They play a significant role in the culture of the Indigenous people of Australia and have many different symbolisms.

In this article, we’ll explain the hidden meanings behind the appearance of cockatoo birds, as well as determine the spiritual meaning of cockatoos.

Keep on reading if you want to learn more about cockatoo symbolism! 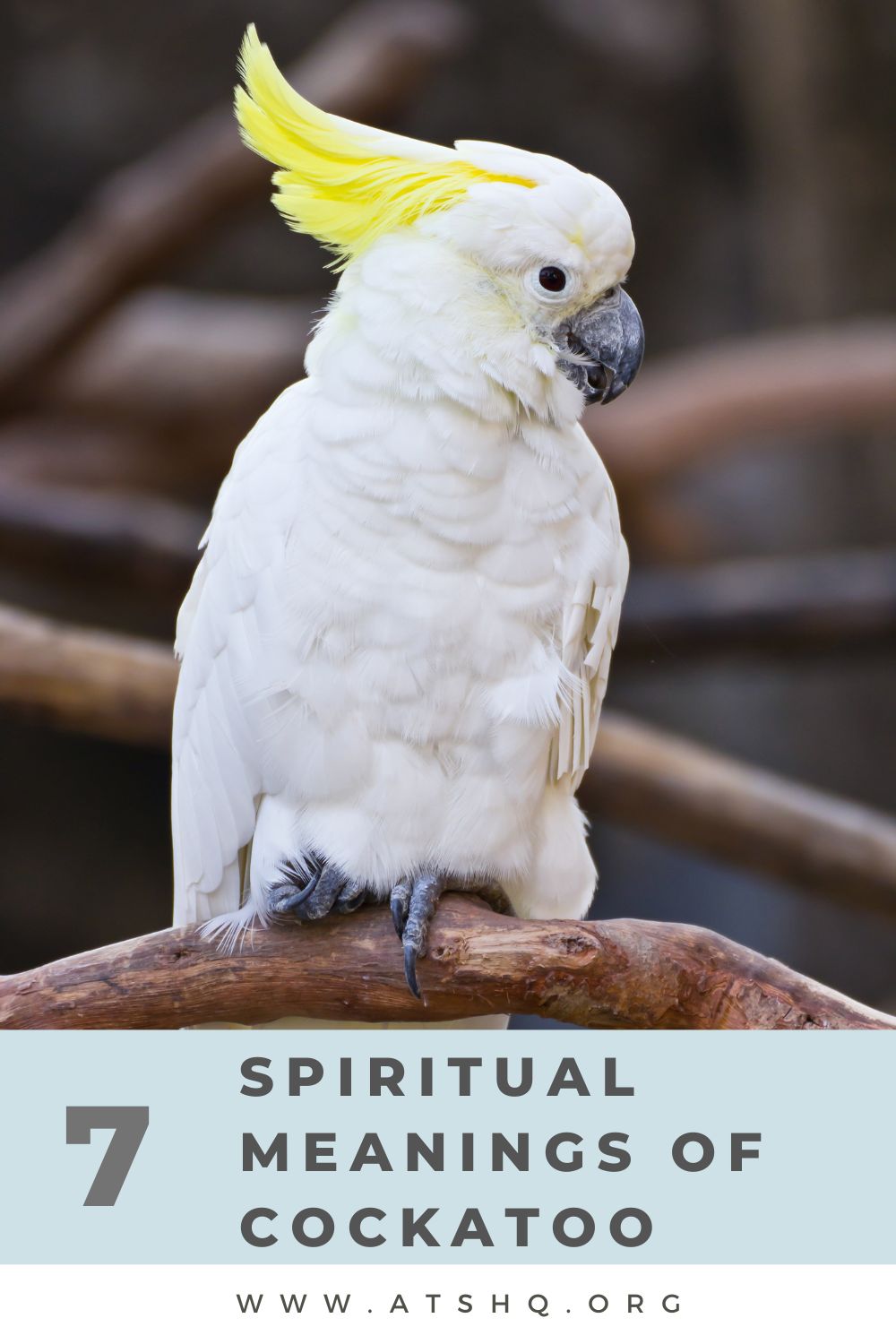 Cockatoos have a few distinct traits that separate them from other birds. They are larger than the average parrot but are often less colorful, with their main body being black, white, or gray.

The cockatoo is known for its curved, long bill and colorful and bright crest. This crest is also used to display emotions and communicate with other birds.

Cockatoos are generally very communicative birds that often live in large groups called crackles. They employ distinct and loud sounds to talk to other cockatoos or warn them against predators. They can even mimic human speech!

These birds also have very high intelligence. Pet cockatoos or cockatoos in captivity can be trained to perform complex tasks. Even untrained birds have the unique ability to solve tricky puzzles, as observed by ornithologists in this research from Oxford University.

All the traits mentioned above indicate that cockatoos are very social beings who like to chat loudly. They are also both very flamboyant as well as smart. However, they are often considered agricultural pests and are hunted down by humans.

Since these birds originate primarily in Australia, they have had tight bonds with Australians for many centuries. Thus, people have developed several meanings around the cockatoo that span across many aspects of life.

Indigenous Australians have always associated the cockatoo with the cycle of life, death, and rebirth of plants. Since ancient times, they would often eat together with the birds when food was abundant. In turn, the birds would take the seeds of plants and spread them throughout the land.

Cockatoos also symbolize the element of fire, as they were believed to be responsible for bringing fire to humans. However, the cockatoo initially kept the gift of fire for itself, which has earned it the trait of selfishness.

Aboriginal Australians have many indigenous mythology tales that include cockatoos. In a popular legend about the world’s creation, the cockatoo was the first creature to die. Naturally, the cockatoo wanted to learn how to live forever. Eventually, it discovered that the constant cycle of life, death, and rebirth is the essence of immortality.

Other stories include specific cockatoo species. For instance, the Black Cockatoo is believed to have been present even before the creation of the universe, when there was only a void, until one day, the Great Mother created everything. The moral of the story is that the purpose of each journey eventually reveals itself to us with time and patience.

Cockatoos rely heavily on teamwork and cooperation. Living in large crackles allows them to cover more feeding grounds and warn each other about potential predators. While they sleep, a sentinel is always “on the lookout” to protect the flock. This sense of community among the birds teaches us about the importance of communication with your family and friends.

Nowadays, cockatoos also have to guard against the additional danger of humans. Since cockatoos often are a nuisance to crops, people can just shoot them down and kill them. They are even considered an issue in urban areas since they can cause property damage.

This sense of teamwork in this iconic Australian bird has funneled down to the local people of Australia. The Australians use the special word “cocky” for the one that keeps an eye out for police. This was particularly important during the time of illegal prostitution or gambling in Sydney. Back then, every group had a “cocky” who was responsible for warning them if the police were close.

The cockatoo bird has always been important in Chinese and Japanese traditions. In particular, during the Tang Dynasty in China, cockatoos were believed to be related to the Goddess of Kindness, Compassion, and Mercy, Kuan Yin. Japanese people celebrate Cockatoo Day on June 15th.

If your cockatoo dreams involve a large flock of birds, it could be a sign for you to cherish your loved ones, whether they are friends or family members. On the other hand, the bird in your dreams could be signaling you to be mindful of who you associate with on a daily basis. Consider the rest of the dream to find hints about who these people might be.

Cockatoos are often regarded as messengers and have a deep connection with the cycle of life, death, and rebirth. If a single cockatoo visits you in your dream, it might be trying to pass you a symbolic message from a deceased friend or ancestor.

If the cockatoo spirit animal appears in your path, you’re probably due for some significant changes in your life. Usually, it will be a positive and successful change that you’ve worked hard to achieve. Just don’t be too cocky about it!

Sometimes, if the cockatoo spirit animal is particularly chatty or noisy, it may be trying to raise your awareness about a specific topic. Also, remember that cockatoos are social birds that fly in large flocks. So, this spirit animal might be here to help you realize that you need to increase your socialization or even warn you that you’re “flying” with the wrong people.

Each specific type of cockatoo can have its unique meaning and symbolism as a spirit animal. If the Sulphur-Crested Cockatoo spirit appears in your life, it might indicate that you are facing a time of personal darkness. It will show you the light to fight the darkness that may be in your way.

The Black Cockatoo spirit animal signifies that you are ready to embark on a new journey that does not have a clear goal or destination. However, do not be afraid, as its black feathers will be there to guide you and provide you with the necessary patience and dedication to achieve the end goal. It will also help you to strengthen your relationship with the Divine. 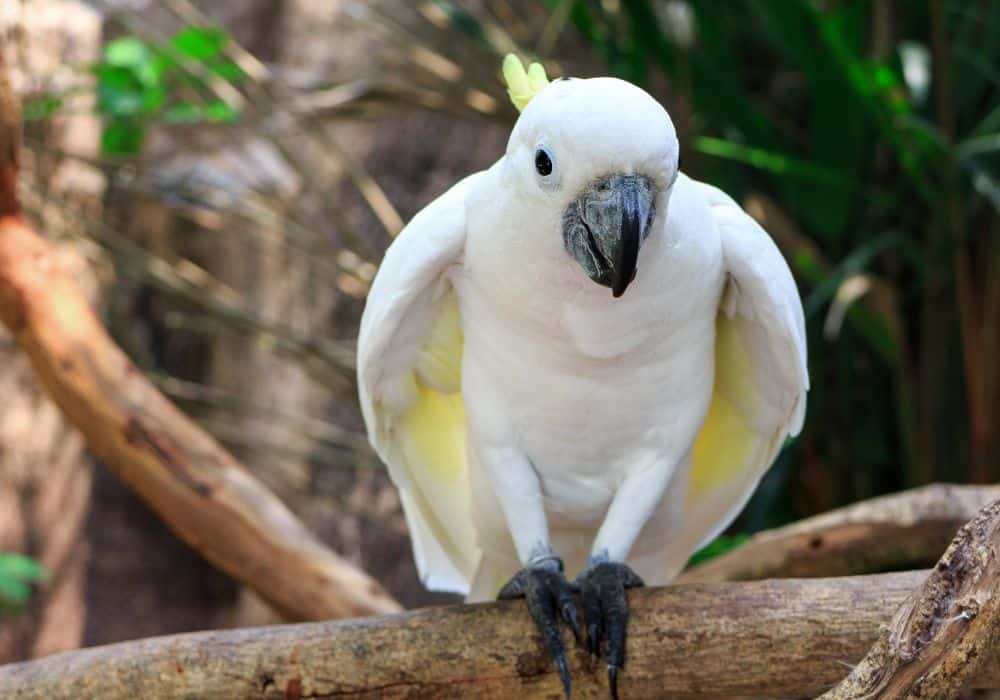 People with the cockatoo totem animal generally have very loud voices and personalities. They like to express their emotions to the fullest; their laughter is loud, and their negative emotions, like grief, are intense. This behavior should not be mislabeled as arrogance, though.

Since cockatoos are very social beings, individuals with the cockatoo totem also like to share experiences with friends and colleagues. They don’t enjoy being alone for a long time and may end up hurting themselves, just like the cockatoo, which plucks its own feathers in isolation.

Another significant trait of cockatoos that also applies to people with this totem animal is their monogamy. Cockatoos are very highly devoted to their partners and usually mate for life. In fact, if the partner of a cockatoo dies, it will become very depressed.

Thus, people with the cockatoo birth totem are always looking to settle down and find their lifetime partner. They are usually devoted to their relationships and become very sad if they break up with their partner.

If you are struggling with circumstances and you feel like something holds you back, call upon the cockatoo power animal. It will provide you with the power to take a deep breath, break free from your shackles, and feel liberated.

The cockatoo power animal will fuel your creativity and expression. If you struggle to express yourself to others, this bird can show you how to do it. It can also grant you easier access to build something yourself from the ground up.

If you feel like you need patience and strength to overcome difficult and uncertain situations, call upon the Black Cockatoo. It will help you strengthen your will and aid you in your journey. Comparatively, the Sulphur-Crested Cockatoo will enlighten your path and show you the way to victory.

All in all, the cockatoo is a powerful animal with many unique traits. Its importance in Australian culture is significant, which has given it many symbolic meanings. If the cockatoo is a part of your spirituality, you’re probably a social butterfly that takes great joy in being close to people and enjoys life to the fullest. So, keep living your best life with the cockatoo by your side!