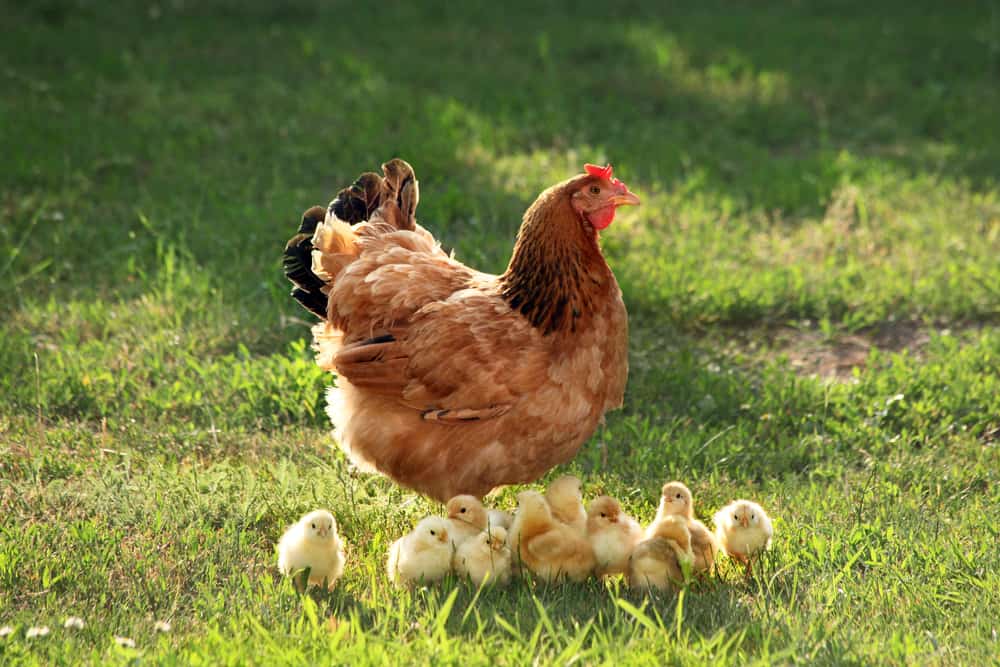 Chickens are native to Southeast Asia and were first domesticated about 8,000 years ago. Quickly after, chickens were brought to nearly every single corner of the planet. Eventually, this bird became one of the most important symbols in many different cultures and played an important role in folklore, mythology, and even religion.

Instead of symbolizing weakness and cowardice like it does these days, the chicken was a sacred symbol, representing everything from fertility and resurrection, to courage and war. In this article, we’re going to explore different meanings of this bird in many world cultures.

In this article, we’re going to explore chicken symbolism, ranging from fertility and resurrection to courage and war. 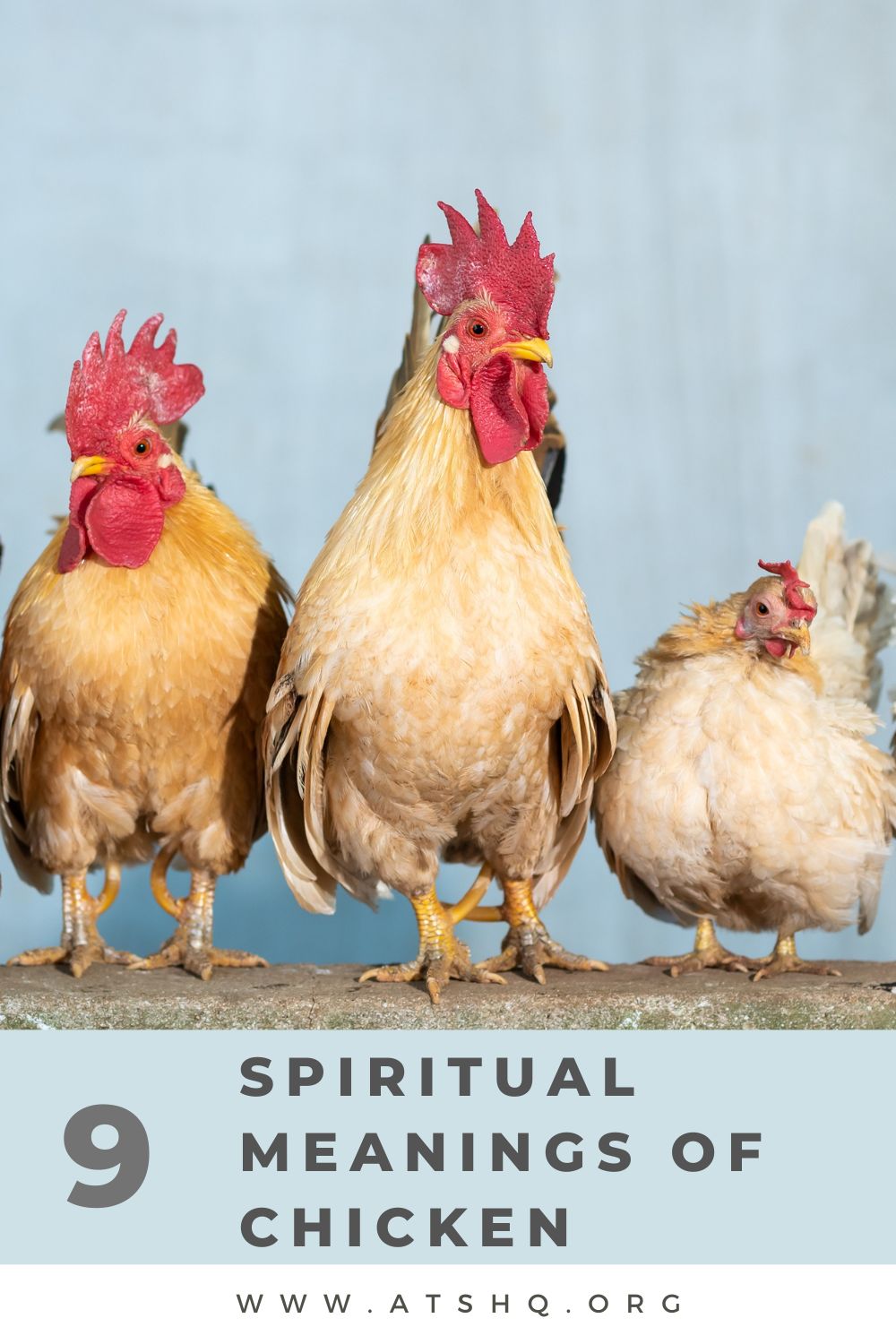 Most belief systems of the world put some kind of symbolic significance onto the chicken, be it as straightforward as just representing good luck, or as complex as playing part in the very creation of the world.

Chickens reached Ancient Egypt about 4,000 years ago, but it took another 2,000 years until they reached deeper regions of the continent. Despite that, chickens had enough time to become a part of local mythology.

For example, the Luhya tribes in Eastern Africa, modern-day Kenya have a shared world creation myth about the Supreme Being called Wele Xakaba. First, he created heaven where he could reside. Then, he decided to adorn it with the moon, sun, and clouds. The third in order of world creation was a giant rooster, which was placed among the clouds.

Luhya people believe that the rooster is responsible for storms; the lightning is caused by it flapping its wings, and the thunder is a result of its crowing. Such a creation myth is the basis for the importance of chickens in Luhya culture.

Chinese mythology has strong connections with chicken symbolism. Even before the first dynasties rose to power, the ancient people of China valued chickens and saw them as a representation of the sun deity. It should come as no surprise, as roosters crow every single morning at dawn, when the sun begins rising.

Because of that, people in some parts of modern-day China would sacrifice hens and roosters to earn the goodwill of the gods. The connection between chickens and fortune is so ancient, that it even seeped into the Mandarin language.

A chicken is also connected to Fènghuáng, a Chinese mythological bird that in the West is likened to Pheonix. Fènghuáng is thought to be a supreme creature representing Confucius’ five virtues:

According to some ancient records, Fènghuáng had the beak of a rooster, making chickens that much more respected. Legends of similar birds are found in most parts of East Asia, showing a deeply rooted connection between chickens and something transcendental. 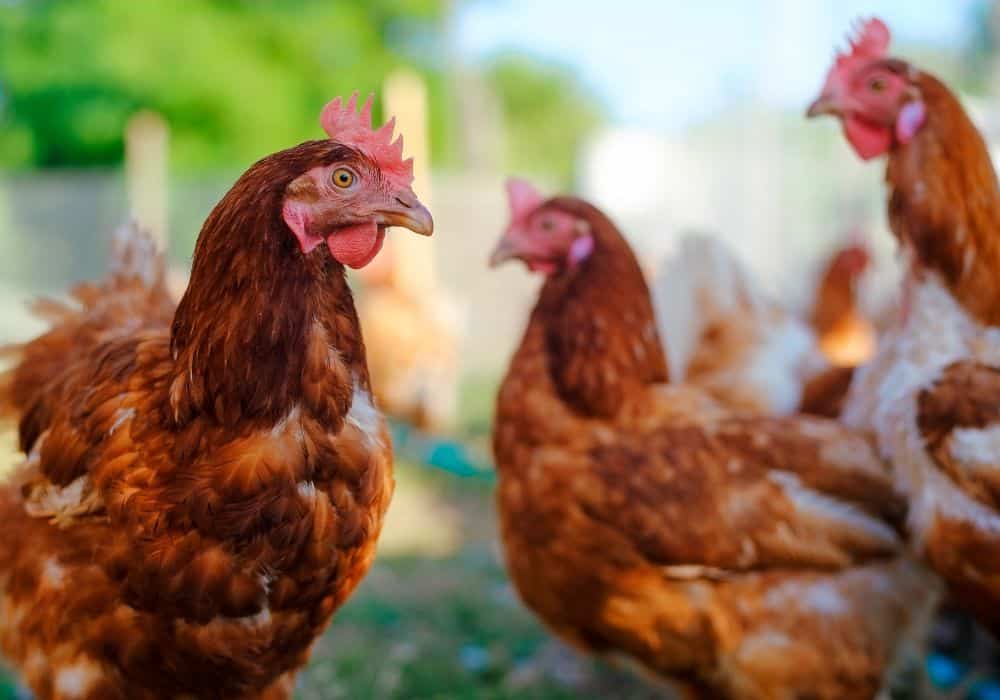 Chickens, specifically roosters also play an important part in Japanese theology. This bird is associated with Amaterasu, one of the major kami (deities) in Shintoism. Amaterasu is the sun goddess and looks over the spiritual realm of gods. The rooster is said to be her sacred bird because every single day she appears as soon as the rooster crows.

Additionally, white roosters are seen as a symbol of divinity and purity. They used to be found roaming free in sacred Shinto temples all around Japan.

Finally, chickens are related to the Japanese mythical sunbird Hō-ō, which is usually likened to the previously mentioned Fènghuáng. Just like the Chinese supreme bird, the Japanese mythological bird is also said to have the beak of a chicken or the rooster.

It’s said that Hō-ō inhabits the celestial realm and descends down to Earth only to mark the start of a new era, bringing peace and harmony.

At the time, Romans were arguably the most advanced people in the technological sense. However, it didn’t stop them from relying on superstitions and other supernatural beliefs. In classical Roman society, priests called augurs raised sacred chickens, through which they could read the will of the gods.

Such practice was called “taking the auspices” and involved an augur starving the chicken, preferably a white rooster, closed in a cage for some time, then releasing it in front of food and water. If the chicken ate actively, it was interpreted as a good omen. On the other hand, if the chicken wasn’t eating well, it was taken as a bad omen.

The Roman Senate would make decisions at least partially based on the results of the auspices, and wars would only be waged if gods blessed it through the chicken.

During the times of classical antiquity, the rooster was a symbol of courage, valor, and virility. It was associated with Heracles, a hero who is the son of Zeus, the supreme king of gods.

Greek mythology has many stories about the incredible adventures of Heracles, where he overcomes the improbable. The rooster was also associated with Ares, who is the god of war, brutality, and courage.

Numerous native American tribes, including the Blackfeet and Cree, have been performing the so-called “chicken dance” for centuries. It consists of dancers swinging their heads back and forth while balancing it out with slower full-body swings.

There are many variations of the legend regarding the origin of the dance, but most of them include a young warrior who went on a hunt. Depending on the version, the man either successfully killed a prairie chicken and was visited by its spirit later that night, or he fell asleep before shooting his arrow and then dreamt of the chicken spirit.

In both versions of the story, the man was taught the chicken dance by the prairie chicken itself. Native American tribes used to perform this dance to maintain a strong spiritual connection with nature, and to express gratitude for the resources she gives. 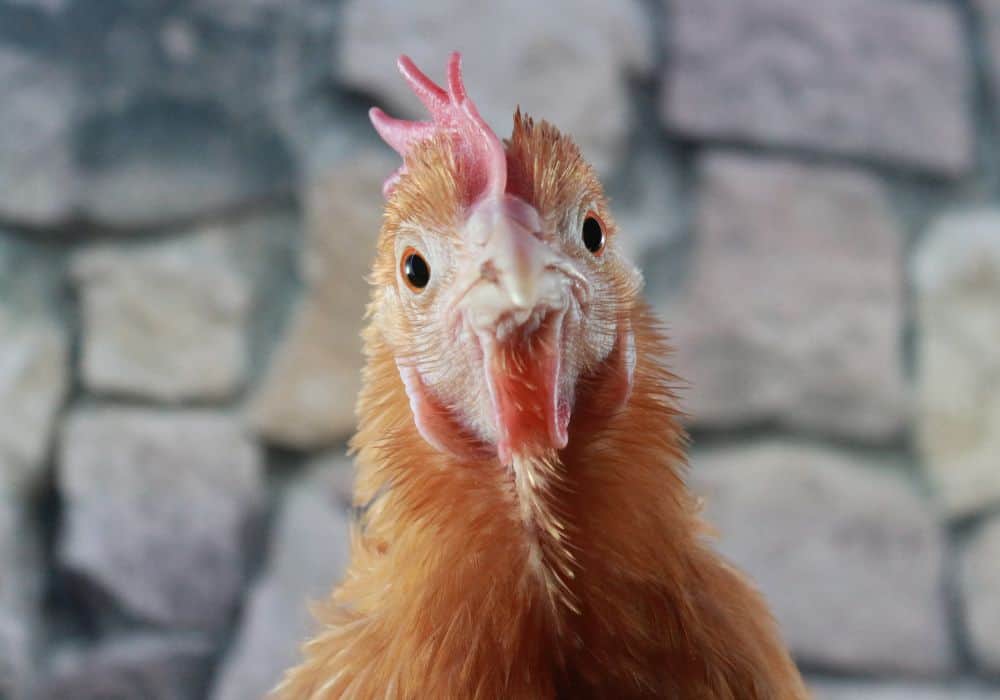 Chickens and roosters are considered sacred among many animistic cultures in Southeast Asia. In this region, cockfighting is a deep tradition spanning back thousands of years. Unlike today, when cockfighting is a form of entertainment or gambling, back then it was a sacred form of fertility worship.

Some cultures also used chickens to fend off evil spirits. For example in Bali, cockfights were seen as rituals that were used for protection against evil spirits. After the fight between two chickens, the loser would be sacrificed to the evil spirits as an offering for peace.

It wasn’t necessary to always sacrifice chickens for them to protect humans from the wicked. In many Southeast Asian cultures, it was believed that evil spirits are only dangerous during the nighttime when it’s dark outside. As roosters crow in the morning, it signals the appearance of the sun, making evil spirits afraid of chickens.

There’s even an old belief that people who get attacked by an evil spirit should start crowing like a rooster, tricking the spirits into thinking that the sun is about to rise.

There are many references to chickens in Jewish theological texts. For example in the Talmud, it’s written:

“Had the Torah not been given to us, we would have learned modesty from cats, honest toil from ants, chastity from doves and gallantry from cocks”.

And “blessed be He who has given the cock intelligence”.

Chickens are also a part of kapparot, which is a Jewish ritual taking place on the eve of Yom Kippur, the most important day in Judaism. The ritual involves one person swinging a chicken above another’s head and then preparing the poultry according to Jewish religious laws before donating it to the impoverished.

These examples show that chickens were important to Jewish people since the dawn of time, and were seen as a symbol of courage, intelligence, and prosperity.

Christianity, just like Judaism, is an Abrahamic religion, so it should come as no surprise that in the early Christian tradition, chickens also carry a lot of symbolic significance and are among the most important animals. For starters, the rooster is a symbol of Jesus Christ, because just like Jesus, the rooster signals to people that the light, the salvation is coming after.

Chickens are also connected to Jesus because they hatch from eggs before laying and brooding the eggs themselves, symbolizing the resurrection of Jesus. We can even find a passage in the New Testament of Jesus directly comparing himself to a hen:

“Jerusalem, Jerusalem, you who kill the prophets and stone those sent to you, how often I have longed to gather your children together, as a hen gathers her chicks under her wings, and you were not willing.”

Just like a hen, who loves her hatchlings so much that she sacrifices herself for the sake of nurturing them, Jesus also shows self-sacrificial love towards his children of Jerusalem.

Moreover, chickens have even older symbolic significance in the early Christian tradition. The first Christians saw cockfights as a sacred representation of the struggles regarding the resurrection. The fierce fight between two chickens symbolized the striving for eternal life, a hope for immortality, and wrestling with death itself.

Most of the oldest Christian crypts, tombs, catacombs, and worship areas of early Christianity feature chicken motifs, including stone carvings and paintings of chickens. For example, in a village called Beit Jibrin, which belonged to the Kingdom of Israel, there’s “Tomb of the Cocks”, which has two roosters painted in red, with a cross in the middle between them.

The rooster even became the emblem of Christianity in the 6th century, after being declared sacred by Saint Gregory the Great. In a similar vein, in the 9th century, Pope Nicholas I made all churches display a motif of a rooster high in the skies, which probably is the reason why most weathervanes today feature a rooster. 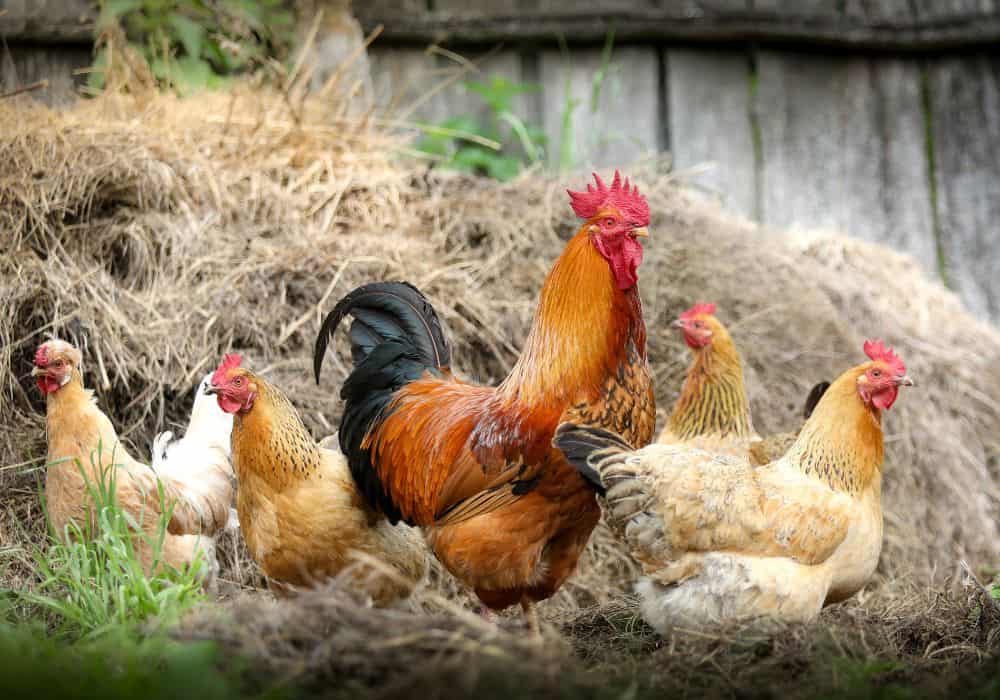 Why Chicken Symbolism Is So Widespread?

As you just read, nearly every major culture in the world, from the Far East in China, to the New World in the Americas, had its own take on chicken symbolism. It begs the question: How and why did the symbolism of this bird become so widespread?

The precise origins of chicken symbolism are unclear, and most definitely vary from culture to culture, and from symbol to symbol. However, the most likely explanation for chicken becoming so highly praised all around the globe is its popularity as an efficient source of nutritious food.

Soon after being domesticated in Southeast Asia, humans helped them spread in all directions of the world; moving Northwest towards Europe, going East towards China and Japan, and even spreading Southwest towards Africa through the Middle East.

Chicken farming was adopted by nearly every single human culture that had come in contact with these birds. Not only do chickens adapt to many climates and environments, but they also don’t require much feed or equipment to flourish in the coop. Furthermore, hens lay eggs, which are incredibly nutritious and easy to consume.

It might very well be the case that many human communities were saved from perishing by chickens that were introduced by outsiders. If we accept the presupposition of chicken being one of, if not the best food source in ancient times, then it’s not difficult to imagine how people started worshipping it.

Stories, myths, and legends related to chickens are varied and found in every corner of the world. Chickens symbolize many traits that makeup what it means to be a virtuous human, including courage, nurture, and contemplation of death.